A witness said the gunman and several other men who carried metal chains used their Mitsubishi SUV to block another car at an intersection on Wanbao Avenue in Furong district at around 11 am, reported peoples.com.cn, the website of the People’s Daily

Police say the gunman surnamed Peng, 36, fired two shots, one of which hit Li, 42, in the face.

According to the report, Li was not seriously wounded and attacked Peng with a brick as several other of his cohorts arrived to join the melee.

Li knocked Peng unconscious with the brick and continued to pummel the bloodied man until police arrived.

There you have it. If guns were legal in China, there’s no question Li would be dead. As is, homemade firearms apparently spray gunpowder, but don’t necessarily kill. 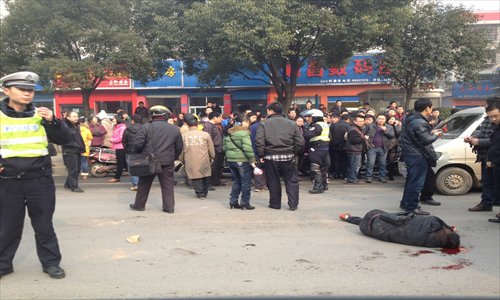 Picture on GT, with accompanying caption: “A man suffering head wounds is left unattended as a crowd looks on in Changsha, Hunan Province, Thursday. The man was reportedly involved in a brawl in which another man was shot in the face. Police say the men sustained only minor injuries. Photo: CFP.”