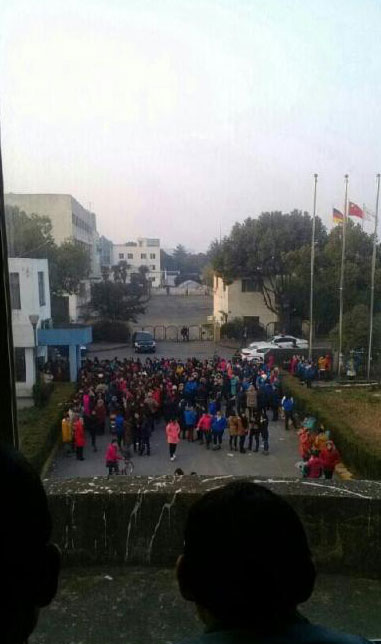 It’s good to see such a public account of the Chinese and Japanese standing in solidarity for once… against an angry horde of 1,000 migrant workers demanding equal regulations.

The standoff lasted until Saturday night, when 400 police officers — that’s a lot of cops — finally freed the managers.

Tamura told the Asahi Shimbun by phone that more than 500 workers besieged his office, and the managers were not allowed to use the toilet. Tamura was locked in his office with six other Japanese managers and five Chinese, while the remaining six were locked in another room.

The report said the factory’s new disciplinary policy was part of a reform scheme after the appliance maker was acquired by a Chinese company last year.

If you’re looking for the juicy detail in the article, however, you’ll find it in the form of a quote from an anonymous worker who claims that workers weren’t happy to see their Japanese company get acquired by a Chinese one.

Another assembly worker, who declined to be named, said they were also angry over the acquisition. She said workers feared that they would no longer enjoy the benefits accumulated in their previous years working in the factory after they signed a new contract following the acquisition by a Chinese firm in Dalian, Liaoning province.

Nationalism has its limits, we see yet again. It’s interesting to think that if it weren’t for a few stubborn Japanese politicians who refuse to visit the Nanjing Massacre Memorial and those damn rocks in the South China Sea, this country and Japan might actually become pretty good friends. Oh well. Keep the hope alive for the children at least.