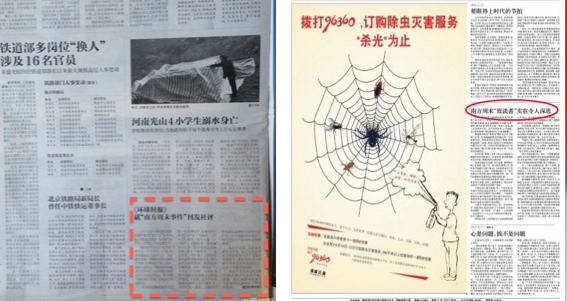 The Central Propaganda Department can force papers to run their government-line editorials, but even with the power vested in them by the Party, it can’t determine where those op-eds appear.

Like, say, next to a humongous ad for pesticide control.

As noticed by the one-man reporting machine John Kennedy, here’s how the Xiaoxiang Morning Post, a sibling publication of Southern Weekly under the Nanfang Media Group, chose to run the now-infamous Global Times editorial: 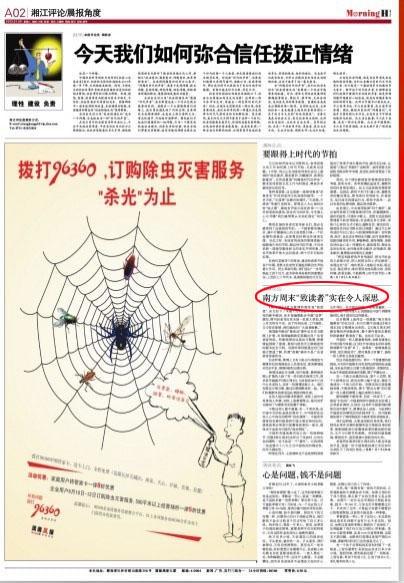 That’s not all, of course. 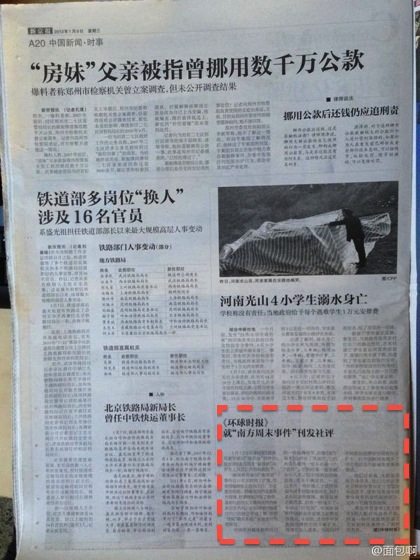 It’s a perfectly snarky response to an iron-fisted directive, much like the acrostics that appeared earlier this week across various online portals to express support for Southern Weekly.

POSTSCRIPT: We’ll note again that it was a sad day in the Beijing News office last night, as its publisher, Dai Zigeng, verbally resigned instead of choosing to reign over the publication of GT’s editorial. People were reportedly crying over the incident:

Although there now seems to be a little confusion as to whether his resignation was accepted, or when it’ll be effective:

I just heard that Dai Zigeng is still the publisher of Beijing News. Talk of his departure was premature?

One Response to “Forced To Run A Pro-Gov Editorial, One Nanfang Media Group Paper Placed It Next To A Pest Extermination Ad”