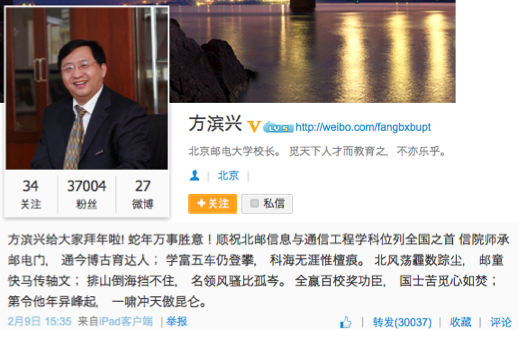 “Get lost” (滚, gǔn) isn’t the worst thing one can write to another person. But what if 10,000 people do it? Would it result in hurt feelings?

Fang Binxing can tell you.

For Chinese New Year’s, Fang, known as the father of the Great Firewall, posted a nice little greeting (in third-person) on his Sina Weibo: “Fang Binxing wishes everyone a happy new year! Success in all endeavors in the Year of the Snake!” it began.

This isn’t the first time Fang’s been the target of invective, online and otherwise.

When he first joined Sina Weibo in 2010, he got so much abuse that he took his account offline. What kind of abuse? Examples via China Digital Times:

-I want to know how Fang Binxing’s mother feels about those comments???
-a Twitter user is here to laugh at Eunuch Fang’s GFW.
-fuck45364378885 gfw.
- He’s a skunk lower than animals.
-This SOB dares to show up here. F–k your sister.
-Greetings to your whole family.
-f–k you 404 times.
- Let’s throw bricks at Fang Binxing as quick as possible.

And then he was pelted by eggs in real life, to “delight”:

The attack on Fang Binxing – a figure popularly reviled by China’s young tech-savvy elite – caused instant uproar and delight on the Chinese internet after the students posted an account of their protest on micro-blogging platforms.

But look at the smiling man in the profile in the above picture, just a happy fool. Would people actually wish him dead?

“It’s a shame it wasn’t you.” This comment, reposted thousands of times, came in response to an obituary posted by Fang Binxing on Sina Weibo, China’s Twitter.

It’s one thing to be hated because you’re an athlete wearing another city’s colors, or trying something new, pushing the envelop, making jokes. To engineer an all-encompassing system designed to hinder, obstruct, and generally frustrate? You can’t blame the people for hating, at the very least.

5 Responses to “Add “Get Lost” To The Nasty Things Netizens Have Tweeted At Fang Binxing, Architect Of The Great Firewall”