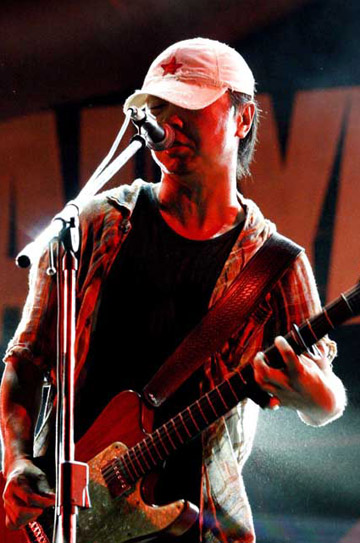 While CCTV insists on appealing to the largest demographic and sucking, we’d like to remind everyone that Hunan Satellite TV has decided to take a chance on mainland rock’s alpha and omega, Cui Jian, to perform on its New Year’s “Mango” Gala on February 4 (7:30 pm).

Rumors have been flying in the press that Cui would “likely not be playing his famous song ‘Nothing to My Name,’ not playing guitar or wearing his red star ball cap,” and that he would be “performing with PSY, galloping onstage together.”

Yes, Cui has done some terrible, terrible things, but refusing to believe he would sell out a legacy built on sweat and tears for a moment of shucking it up with PSY, we called Cui’s management, who said “he will definitely not be performing with PSY and will perform his own material.” The source refused to divulge which songs Cui will perform, or what he’ll actually do. Even the status of his baseball cap is considered privileged info.

Slated to join Cui is Beyond guitarist Huang Guanzhong (Paul Wong), but according to reports, we are still unsure he will perform.

Probably sensing how farty they are, CCTV has recruited the once-underground and edgy Wang Feng to give it some rock cred. Wang has earned this shot with years of work, and is quite rightly pumped:

“I remember a long time ago on one New Year’s Eve, my parents were watching the Spring Gala and asked me, ‘When are you gonna be singing on there?’ and I said ‘Come on, don’t push!’ After many years my friends are asking me, ‘Wo will you be on this year？’ and I said, “Yes!”

But this is CCTV, and this is now Wang’s version of rock and roll. Hey, it’s your holiday.