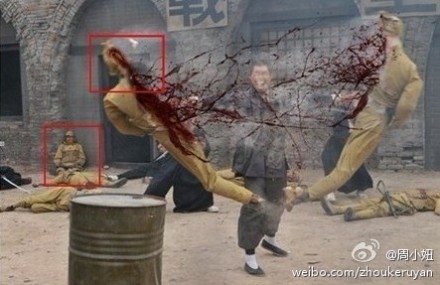 In a scene that would make even the producers of the Starz original series Spartacus reel, check out this Chinese warrior literally tear a Japanese soldier in half.

As described by Ministry of Tofu:

Chinese-made anti-Japanese patriotic television dramas have been the object of an awful lot of ridicule on Sina Weibo, the Chinese twitter, after netizens found much to their amusement that in one extreme example, a Chinese man tears up a “Japanese soldier”, or commonly known in China as “Japanese devil”, across like a piece of paper, with blood splashing all over the place.

Zhouxiaoniu, a net user on Sina Weibo, first posted the screen capture of the scene, “Tearing the devil with bare hands! I am on my kneels begging for the name of this television drama! So fuking awesome!” The tweet has got nearly 6,000 shares and 1,400 comments. 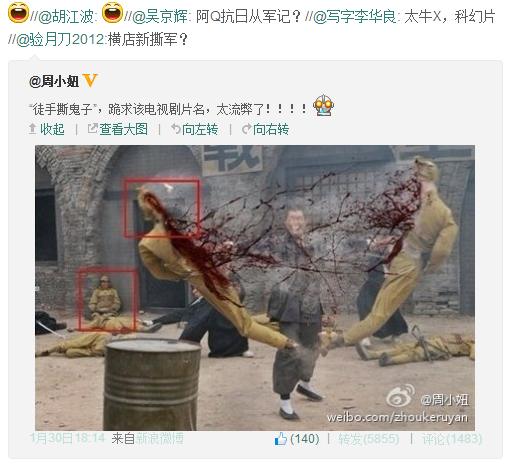 Reminds me of a line from Blood Meridian: “The old man raised the axe and split the head of John Joel Glanton to the thrapple.” This guy here went a bit deeper than the thrapple, wouldn’t ya say?

On TV, Chinese man rips ‘Japanese devil’ in half with bare hands; netizens call it ‘wet dream’ (Ministry of Tofu)