Here’s the lede to AFP’s write-up:

At least 26 people were killed as a bridge collapsed in central China on Friday after a truck carrying fireworks exploded, state-run media reported.

That’s perfect. The who-what-when-where-why in one compact sentence, telling us so much with so little.

And leaving so many questions.

The lorry “suddenly exploded” as it crossed the expressway bridge in the central province of Henan, China National Radio said, causing sections of it to collapse and sending other vehicles plunging to the ground.

An 80-metre long section of the bridge collapsed and six vehicles had been retrieved from the debris, China’s official news agency Xinhua said, adding that rescue efforts were underway.

So on and so forth.

Seven people died at the scene of the accident, while two others died on the way to hospital. Of the 11 injured, four are in serious condition, the rescuers said. Previous reports said 13 people had been injured. 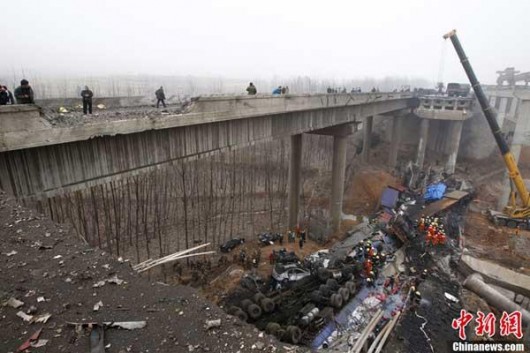