Babe: Pig in the Drinking Water. You’ve read the story, seen the video (above, if not). Now hear what the Onion, et al., have to say about the thousands of dead pigs in the Huangpu River, a source of “most” of Shanghai’s drinking water for its 23 million residents.

Pigs suffer a wide variety of illnesses. A 2007 outbreak of high-fever blue ear disease killed around 50 million pigs, according to British and Chinese researchers. The World Organization for Animal Heath reported in January that Chinese authorities culled 948 pigs in southern Guangdong province after an outbreak of foot and mouth disease there. Mr. Chen said there are no signs of an epidemic but noted the approaching springtime is the key period to prevent disease. Research firm Genesus Genetics estimates China’s total pig population at more than 470 million.

The Shanghai government said in a statement posted on its website on Monday that workers were continuing to collect carcasses from the river and it was closely monitoring the water quality although no pollution has been found so far.

Via Perry Bible Fellowship, of course.

Authorities have been pulling out the swollen and rotting pigs, some with their internal organs visible, since Friday – and revolting images of the carcasses in news reports and online blogs have raised public ire against local officials.

The Onion (via The Good Doctor):

Over 2,800 pig carcasses of unknown origin were found clogging Shanghai’s Huangpu River, the main drinking water source for the city, sparking widespread fears of contamination. What do you think? 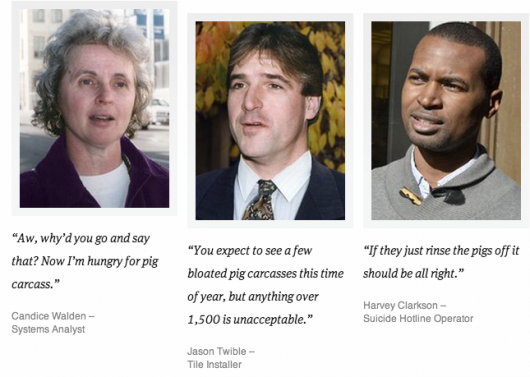 Sorry, this is the better link for @tomphillipsin report from the bay of pigs. See last line…telegraph.co.uk/news/worldnews…

I’m more worried about Huangpu River contamination to those poor delicious pigs than anything else I mean cmon amirite?

UPDATE, 3/13, 12:35 am: It’s now 5,916 pigs, according to Sina. Many suffered from circovirus, a disease that affects pigs but not human beings. Also, the water apparently remains uncontaminated.