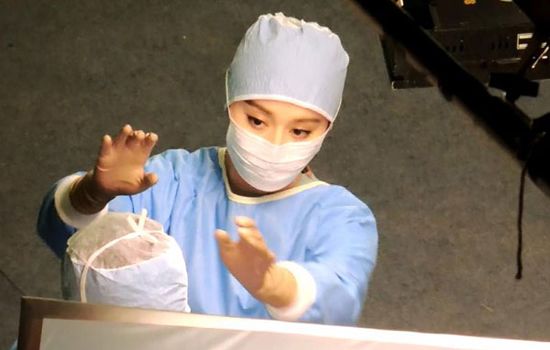 There’s been a lot of hoopla over one of Iron Man 3′s film location, namely China — we heard the buzz as early as April 2012 — but only two notable Chinese actors appear in the film, Wang Xueqi and Fan Bingbing, and the latter doesn’t even appear in the new trailer. How disappointing, considering Fan is, by some accounts, the most popular actress in China?

Both versions of the film include Iron Man 3 footage filmed in Beijing in December. The Chinese version of the film will also feature a special appearance of China’s top actress, Fan Bingbing, and will offer specially prepared bonus footage made exclusively for the Chinese audience.

The implication, we think, is that Fan doesn’t appear at all in the US version. (Hopefully we’re not misreading between the lines.) The above image, from Sina, is reportedly a shot of Fan in the movie itself. You can only see her eyes!

The movie will be released in the US and China on May 3.