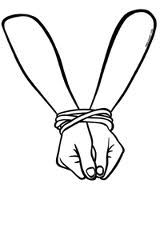 First, let’s make clear that it could be a suicide. It’s certainly possible that someone would go to the riverbank, bind his feet, then hands, then tie a manhole cover onto his body and jump in.

But if you were the police, would you really rush to that conclusion in less than two days?

On Monday, a man surnamed Chen, who turns 30 this year, was found at the bottom of the Xincheng (New Town) River near Wangyue Bridge in Yangzhou, Jiangsu province, according to Yangzhou Daily. His hands and feet were bound, and there was a manhole cover  tied to his body. Police inspected the scene and then sent the body to the forensics lab, where, after a postmortem, they concluded that Chen committed suicide.

“Residents at the scene guessed one after another that foul play was involved,” Yangzhou Daily points out.

Chen is reported from Lianzhou, Guangdong province. Authorities are now currently investigating the “reason for his suicide.”

4 Responses to “Man Found Dead In River Tied To A Manhole Cover With Hands And Feet Bound, Police Declare It A… Suicide?”

Leave a Reply to Daniel Bos