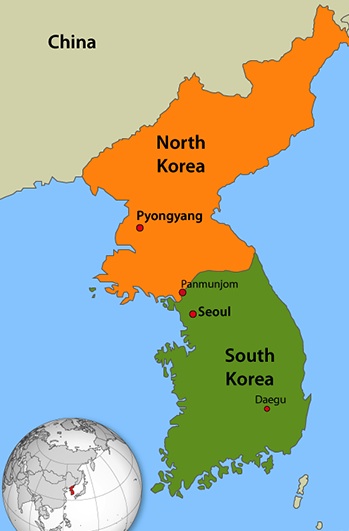 According to AFP, North Korea issued a statement that read, “As of now, inter-Korea relations enter a state of war and all matters between the two Koreas will be handled according to wartime protocol.” North and South Korea, as everyone is quick to remind, have technically never been out of war since 1950 because no peace treaty was ever signed, but…

“The long-standing situation of the Korean peninsula being neither at peace nor at war is finally over,” said the statement carried by the official Korean Central News Agency (KCNA).

What does it all mean?

Saturday’s statement warned that any military provocation near the North-South land or sea border would result “in a full-scale conflict and a nuclear war.”

If you’re one who prefers to believe Kim Jong-un and the leaders of North Korea are irrational human beings who aren’t afraid of committing national suicide, Max Fisher of the Washington Post gives us this reason to not be overly concerned:

The Kaesong Industrial Complex, located just across the northern side of the border, is staffed by South and North Koreans. It can’t function without Pyongyang’s daily okay. If the North suddenly shuts down Kaesong at some point, watch out. But as long as it’s still running, as it has been throughout the provocations and tensions of the last few weeks, we can probably –  probably — assume that North Korea is not actually planning to launch a war.

…Kaesong is still running smoothly, according to an AP story by Hyung-Jin Kim and Sam Kim, who say this demonstrates that Pyongyang is “choosing the factory’s infusion of hard currency over yet another provocation.” They also note that North Korea has so far not chosen to sever three other hotlines that are used to keep North and South Korean air-traffic controllers in touch.

North Korea is ready though. Ready to fight, and to die. Isn’t that right, lads?