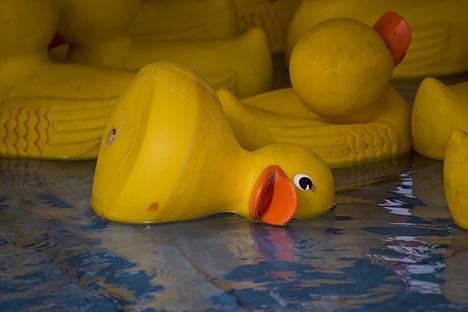 As if 16,000 ducking pigs in the river wasn’t enough of a prodigious ducking fact, Danwei tells us more than a thousand dead fucks have now been found in a Chinese river.

The front page of the Tianfu Morning News (天府早报) from Sichuan province today reports that on the afternoon of 19 March, more than a thousand dead ducks were found floating down the South River at Pengshan county (彭山县) near the city of Meishan (眉山市) in Sichuan province.

To be clear: we’re not just talking about the Beijing Ducks playing dead against Shandong in their CBA semifinals series. These are actual dead ducking fucks floating in muck.

Officials rushed to the scene and later found more dead ducks – in various states of decay and some wrapped in white bags – piled up on a river bank some distance upstream close to the towns of Qinglong (青龙) and Guanyin (观音). The ducks were piled on this spot a few days before – by whom no-one knows – and the river gradually swept them along.

Of course there’s no danger to humans, say authorities. Why would there be, if 16,000 dead pigs don’t even affect water safety? Tianfu Morning News was particularly helpful:

3 Responses to “Now They’re Throwing Dead Ducks, Thousands Of Them, Into The River”