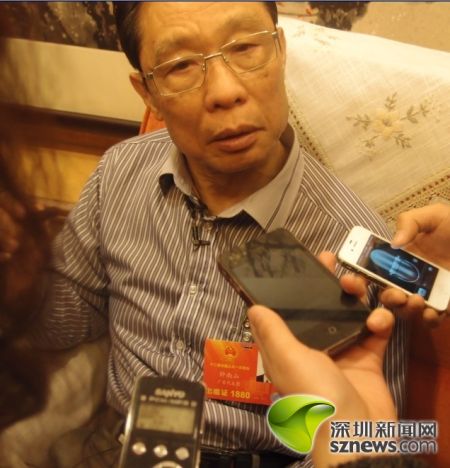 In an interview with Shenzhen Evening News published yesterday, Chinese Academy of Engineering scholar and NPC delegate Zhong Nanshan, 77, who rose to fame in 2003 for his work during the SARS crisis, said he hopes the government will start paying as much attention to pollution levels choking our fair city as it does to GDP.

We just saw a panel of delegates refuse to answer a female reporter’s question about the environment — perhaps she should have asked Zhong, who has conducted research into the true scale of Beijing’s pollution problem:

The Beijing Municipal Health Bureau’s 2010 tumor prevention report reveals that the lung cancer rate among Beijing men has reached 76.57 in 100,000, while the breast cancer rate among Beijing women has reached 48.6 in 100,000. “Pollution rates are highest in the Chaoyang, Fengtai and Shijingshan districts and lowest in Miyun and Huairou.” Zhong fears that if this level of pollution continues, the number of cancer patients will increase astronomically.

“People have no natural defense against pollution.”

Zhong also hit back at China’s national oil companies for claiming that national standards are too low and that they aren’t to blame for the current crisis. “So we can’t make any international comparisons?” Zhong asks. “Does internationalization not come into it at all?”

Zhong believes the environment should be used as an indicator of government performance. Although GDP is a clear indicator of economic progress and living standards, priority should also be given to the environment: “When basic actions like eating, drinking and breathing become an issue, what good is having the highest GDP in the world?”

Naturally, he finishes on an inspiring note.

“When the Chinese people come together, there is nothing we can’t achieve,” he says. “If the government acts now and people give up their polluting habits, we will see a real difference in the next 10 years. Hopefully I will still be alive to see it.”

Will it ever actually happen? You decide.

Robynne is a writer, translator and Chinese graduate living in Beijing. She tweets @frommyplate.