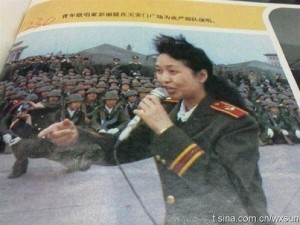 Peng Liyuan may be unlike other wives of China’s leaders — she’s the country’s first “First Lady,” after all — but that doesn’t mean you’re allowed to stray off-message when talking about her.

Case in point, the above photo, published by @HKfighter with an accompanying message that was translated Tuesday by China Digital Times:

@HKfighter: After the Tiananmen Massacre, Peng Liyuan sang to comfort the soldiers. Open Magazine published this photo. [Then] for the 82nd anniversary of the founding of the Chinese Communist Party [in 2003], she sang the theme song for a commemorative film, declaring “fight for power, rule the country,” the heartfelt thoughts of the Party elders.

The picture didn’t last long on Chinese Internet — it is, we reiterate, her singing to soldiers after the June 4 Tiananmen crackdown — and neither did @HKfighter: the account has been deleted.

Open Magazine is a liberal Hong Kong journal, as CDT informs. Earlier today, the Associated Press confirmed the authenticity of the photo:

The image of Peng, wearing a green military uniform, her windswept hair tied back in a ponytail as she sings to helmeted and rifle-bearing troops seated in rows on Beijing’s Tiananmen Square, contrasts with her appearances this week in trendy suits and coiffed hair while touring Russia and Africa with Xi, waving to her enthusiastic hosts.

…The image is a snapshot of the back cover of a 1989 issue of a publicly available military magazine, the PLA Pictorial, according to Sun Li, a Chinese reporter who said he had taken a photo of it on his cell phone several years ago when it was inadvertently posted on his microblog. Sun said he quickly deleted it and had no idea how it resurfaced on the Internet years later.

The other picture that’s been scrubbed from Chinese Internet — it lived longer before dying an unceremonious death — is a photoshopped image of Xi Jinping carrying his wife’s purse. All in all, it’s rather complimentary, but enough people have been fooled into thinking it’s real that authorities probably figured it’s more trouble than it’s worth.

China Media Project is on this one:

The post is a repost of an original post that read: “Even a really awesome husband must help his wife carry her bag. Ha ha!” 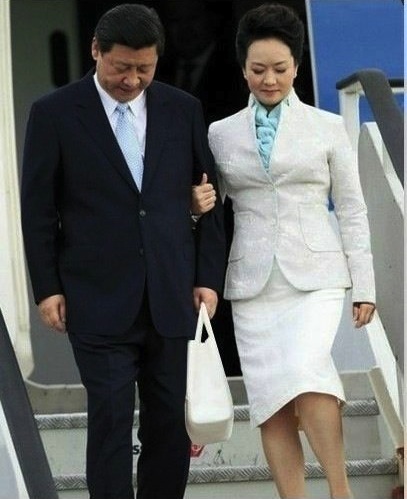 Perhaps this is why the CPC was hesitant, earlier, to unleash Peng Liyuan: public figures always come with baggage.

3 Responses to “Two Peng Liyuan Photos Deleted From Chinese Internet, Including One Of Her Serenading Troops In Tiananmen In June 1989”