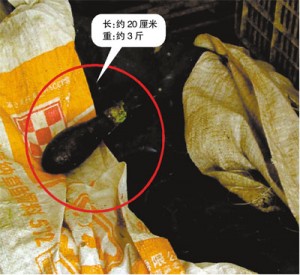 “Squid bomb” can refer to squid jigs for catching squids, a World War II anti-submarine weapon, or this annoying video featuring Squidward Tentacles. It’s never meant to be taken literally, i.e. a bomb inside a squid.

Until now. Now it can mean exactly that: a bomb inside a squid.

In Guangdong province’s Jiaoling County, a market seller discovered, while gutting a squid, a metal object that looked like a bomb. It was a bomb: about 20 centimeters long (about two and a half feet) and 1.5 kilograms (3.3 pounds).

The Nanfang reports via Guangzhou Daily:

The sherriff’s department later confirmed it was an active bomb and carried out a controlled explosion.

The seller, Mr. Huang, speculated that the squid had swallowed the bomb thinking it was a fish.

A reminder that more than 10 million mines are buried in the earth. How many swim the seas?