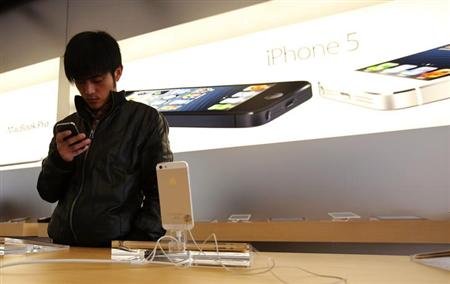 Trying a phone at the Beijing Sanlitun Apple Store, March 28, 2013 (image by Kim Kyung-Hoon for Reuters)

The customer is always right — so on Monday, Cook, on behalf of Apple, issued an apology to Chinese consumers on its website, after “deep reflection.” “We express our sincerest apologies for any concerns or misunderstandings,” he wrote (translated into Chinese).

“Chinese consumers are always are foremost priority,” he concluded.

It’s because Chinese consumers make Apple a lot of money, of course. But let’s set the cynism aside for a moment. If the apology wasn’t strictly necessary, tweaking the policy is the right thing to do. Specifically, Apple will clarify warranty plans, improve repair services, train service providers and authorized resellers, and open a line of communication with customers.

CCTV may not have delivered its message most elegantly — certainly it could have done without its sloppy and juvenile astroturfing campaign — but it was correct to point out flaws in the world’s most valuable company. If you claim to be the best, you have to maintain best practices; perhaps CCTV only wanted Apple to live up to its reputation.

Cook’s apology is also the best rebuttal he could have given to People’s Daily, which attacked Apple recently for possessing “unparalled arrogance.” Arrogance? Not this company, which has apologized. If Apple didn’t have enough fans in China, it probably gained some more with this display of humility.