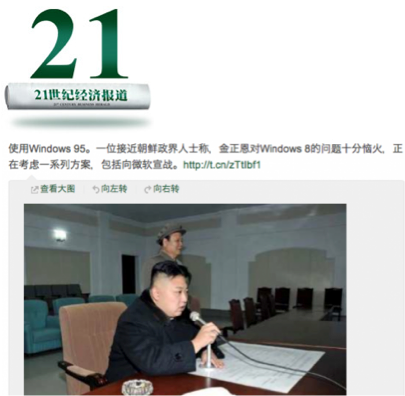 Problems with Microsoft’s latest operating system Windows 8 led to a delay in North Korea’s widely dreaded missile test, the satirical American news website The Borowitz Report said on Thursday and it was obviously a joke.

It’s not obvious enough — despite the fact that this joke is actually kind of old, and Kim Jong-un uses a Mac.

The Chinese daily 21st Century Business Herald fell for the spoof. On its Sina Weibo micro-blog, it reported the Borowitz prank, including its imaginary quote from the state-run Korean Central News Agency saying that the regime “was working with Windows 8 support to resolve the issue.”

Well, at least they didn’t fall for something patently absurd, such as Kim Jong-un declaring war on a company or something.

It also fell for another dubious quote from a “source close to the North Korean regime” saying that Kim Jong-un was considering declaring war on Microsoft.

Jesus. Keep Nigerian princes away from these dupes, yeah?

21st Century Business Herald has deleted its original Sina Weibo post. Meanwhile, we think we should tell our friends at China Daily Show and Ministry of Harmony to pitch them some stories. Surely, eventually, they’ll begin to get it.

One Response to “Chinese Weekly Falls For Another Spoof, This One Claiming Kim Jong-un’s Missile Launch Was Delayed By Windows Glitch”