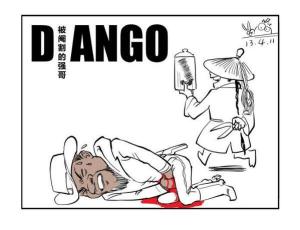 Good news and bad news for those itching to see Django Unchained on the big screen. Seeing Red in China reports via China News that the film might be returning to mainland Chinese theaters, though likely not in its current form.

There have been reports today that Django could be resumed late this month in Chinese theaters, provided that director Tarantino will cut what the Chinese censors ask him to cut.

One person who was briefed on plans for the film said late Friday that it would undergo additional cuts to qualify it for the Chinese film market, following some slight earlier changes to its presentation of bloodshed. The person was not authorized to speak publicly about the plans because of confidentiality strictures.

We might learn, then, exactly what scene was so offensive to SARFT sensibilities as to warrant a postponement, and have it pulled from a Beijing theater after it already began.

The exact nature of the problem is not clear, though speculation in China and Hollywood has focused heavily on the film’s portrayal of nudity. Its longest scene with nudity is one in which a naked Django, played by Jamie Foxx, is tied up and about to be castrated. There is also a shorter scene in which a female character played by Kerry Washington is dragged naked from an underground chamber.

The winner in all this, if the movie is indeed screened here, is Quentin Tarantino and whatever studio’s in charge of international distribution. No publicity is bad, and certainly not when a universally loathed entity such as SARFT is on the other end.