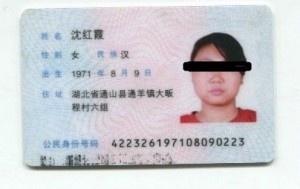 Most of us are familiar with the thought process behind China’s One Child Policy. But in practice, the laws enforcing population control fall short as ethics and morals fly out the window. Actual enforcement of said laws differ based on location and the socioeconomic status of those who challenge the policy. Some women and their families are subjugated to physical punishment, while others simply pay a fee.

Even one forced abortion or sterilization is one too many, so it is gut-wrenching to note that these are conducted with disturbing frequency, at the will of local officials. Worse, the government at large seems to choose to overlook certain practices.

News entities throughout the country are abuzz with the most recent publicized incident, which occurred last month in Tongshan, Hubei province. Women’s Rights Without Frontiers reports on the forced sterilization of a 42-year-old woman in Dabancheng Village, Hubei province:

On March 19, a doctor at Tongshan County warned that sterilizing Shen Hongxia would be life-threatening. Nevertheless, local Family Planning Officers forcibly sterilized her, in order to avoid an “illegal pregnancy.” Shen Hongxia, 42, died, leaving behind her husband and two children, one of whom is two years old.

The family was then coerced into signing a waiver.

The Family Planning Bureau and the Village Committee attempted to cover up their criminal responsibility by making an agreement to compensate the family by installments, and to build them a house. Family members felt forced to sign the agreement, as they saw no other way to seek relief.

It reminds us of the story last June of a forced abortion in Shanxi. These and similar events are instances of disgusting violence perpetrated by members of the government that are influenced by a greater concern for money than humanity.