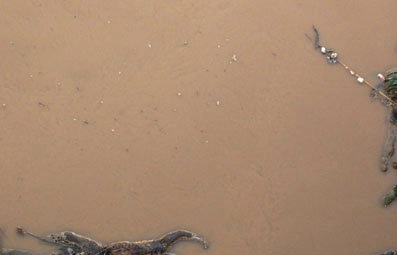 The government of Lanzhou, capital of Gansu province, announced on March 28 that “around 100 bodies on average are dredged from the river in the city every year, whether they were careless swimmers, people who fell in the river by accident, or people who have committed suicide,” according to Want China Times.

Forbes’s Gordon Chang, picking up on the story, cites an article from last October in Shanghai’s Oriental Morning Post that states “since the 1960s at least 10,000 human corpses were found in an 80-kilometer stretch of the Yellow River in and near Lanzhou” (Chang’s paraphrase).

The presence of decomposing humans in the waterway is not just limited to the area around the Gansu capital.  Body fishers work most of the Yellow River, Asia’s second longest, from west of Lanzhou to Shandong province at its mouth.

Although there is some good news. Accoring to SCMP:

Lanzhou officials say the quality of local water is actually improving – despite more than 100 bodies being discovered in the Yellow River each year.

Lanzhou environmental bureau deputy chief Li Lei said officers had been closely monitoring the quality of drinking water and did not find it had been affected by bodies in the river.

“Based on our overall measuring results in past years, water quality not only remained normal, but in some cases has even improved,” Li said.

If a government official says it? I’d like to buy all your bottled water, please.

POSTSCRIPT: If you’d like to see the uncropped version of the top picture, of dead bodies in the Yellow River, click on McClatchy’s story on this subject from September 16, 2010. A “fisher of dead people,” Wei Jinping, was quoted as saying (total hearsay, mind you), “Most of the bodies that are not claimed by relatives are female migrant workers who had moved to Lanzhou…. Most of them have been murdered…. Their families don’t know; they think they’re still working in Lanzhou.”