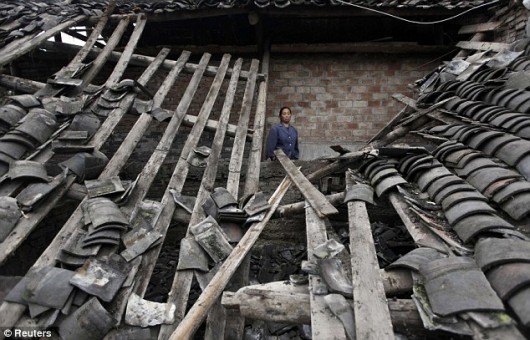 The suffering and grief that accompanies the loss of an only-child is already unimaginable, but what about the loss of two children, in the same place, five years apart, to the same natural disaster? Lu Jingkang, 50, has lost both her children: her son in 2008 to the Wenchuan earthquake, and her daughter on Saturday in the Ya’an earthquake, both occurring along the Longmenshan fault in Sichuan province

“God has been too harsh on me, way too harsh,” Lu told the Yangtse Evening Post on Sunday in incredible understatement, as relayed by SCMP.

Lu said she had never fully recovered from the tremendous grief after losing her son in 2008. Her daughter gave her the only solace over the years.

The teenage girl had written in her diary once: “There is already too much weeping at home. I won’t cry anymore… [and I] shall become Mum’s mainstay,” the Post reported.

If there is fairness in the universe, luck and happiness and life’s melange of tender and good, it comes at the incredible cost of calamity borne by individuals such as Lu, counterweight to weight. Somewhere in the rubble, a child is born, and he will prosper. There is no other comfort.

Mother loses son, then daughter in both Sichuan earthquakes (SCMP)