We’ve seen our share of Gangnam Style dances and remixes, from the good to the bad to the political to the Ai Weiwei, but nothing quite as weird as this.

Our friends over at That’s Beijing tweeted the above video, titled “Beijing Dancer (Mr. Fabulous).” It was uploaded to YouTube on Sunday by Michaeljava, who writes:

People in Beijing dance in almost every park from organized line dancing to traditional dancing to modern dance. They sing songs and really have fun but these two guys had their own deal going on. I can’t explain what the guy with no shirt was doing but he seemed to be mixing some kung fu and free form dance but the dancer in the hat was awesome! He was blasting music from his PA system and seemed to have his own take on Psy’s Gangnam style. I just call him Mr. Fabulous!

Now please carry on with your Gangnam Style embargo. Psy has a second song now, after all. 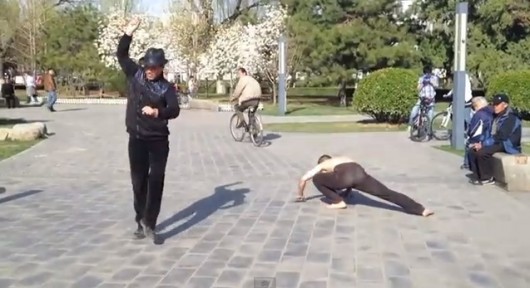 @anthonytao Special props to the Gollum impersonator: I think we know what 2013′s hot summer look is going to be…#mrfabulous