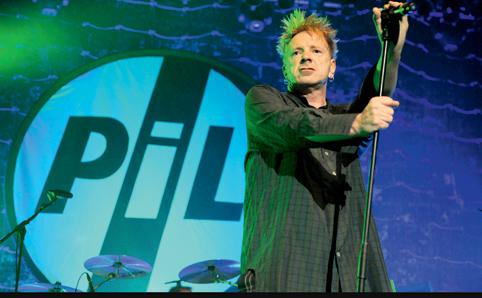 Ah, music festival season in China. With the balmy climes and fluffy white cottonwood pollen comes the annual rumor mill about which bold-faced recording artists are slated to perform at the summertime’s numerous annual kickoff events, which have been denied performance permits, and general conspiratorial grumblings about why this is and who’s to blame.

The controversy has already begun. Kraftwerk, an influential electronic music outfit, was denied permission to play at the Modern Sky Strawberry Music Festival in Beijing later this month, AFP reported last Friday. Meanwhile, another groundbreaking experimental act, PiL, the boundary-pushing brainchild of Sex Pistols co-founder and all-around gadfly John Lydon (formerly Johnny Rotten), was allowed to perform in Beijing and Shanghai this past weekend, despite Lydon characteristically crabbing to NME that he had to submit the entirety of his eyebrow-raising lyrical oeuvre to the Ministry of Culture.

Gah! Lydon has been in the public spotlight for the past 40 years with a reputation for being an unfiltered loudmouth, while Kraftwerk comprises mild-mannered neatniks who perform yawn-inducing electronic drone music and sing about robots and technology while wearing matching outfits. Why give the outspoken provocateur a pass and ban the science dorks?

While it’s easy to fault the authorities for being oppressive Bond villains, the reality of the delicate ballet between cultural officials and promoters is a swirling maelstrom of three main factors that, while inconvenient for the rest of us, might actually make sense when viewed through this country’s unique cultural prism. Let’s take a look.

China doesn’t like outsiders meddling in her internal affairs. Period. When it comes to hot-button issues like national sovereignty and sensitive “state secrets,” namely Tibet, the Dharma Wheel People, the Blind Guy and the Bearded One, then all bets are off — especially when incoming foreign artists have, through their participation in activist political movements, spurred the growth of organizations like Students for a Free Tibet that actively seek to widen China’s already-fragile fault lines.

While the Ministry of Culture (MOC), the state organ that is responsible for setting guidelines for the country’s cultural policies, did not give a reason other than “political issues” for rejecting Kraftwerk, it’s tacitly understood that the decision is related to the long-running German outfit’s planned participation at the Tibetan Freedom Concert, a massive 1998 festival at RFK Stadium in Washington DC that sought to support the controversial Tibetan independence movement.

Kraftwerk didn’t end up performing at the gig, having pulled out after lightning strikes during Herbie Hancock’s set.

But lightning apparently does strike twice. “We had to submit the audio, videos and lyrics [of Kraftwerk] to the Ministry of Culture,” Modern Sky staffer Peng Peng told the Deutsche Presse Agentur after news of the band’s Chinese visa denial was made public. “They review it. If they think the lyrics are not proper, or some live videos are too extreme, too bloody, too obscene or too violent, they will ask you to change the song.”

“If you don’t want to change it, you just cannot perform (in China),” Peng said. “If you have any political problem, it will be impossible for you to come.”

On-stage political outbursts by foreign artists, authorities say, empowers and legitimizes dissidents and inflames pre-existing tensions. Oft-cited screamers include the reactions to the Rolling Stones’ Shanghai gig in April 2006 when the authorities channeled their inner Ed Sullivan by prohibiting the band from performing the sexually-suggestive “Let’s Spend the Night Together,” the controversy that swirled around Bob Dylan’s April 2011 visit, and the blowback surrounding that infamous list of 100 Western pop songs banned by the MOC because they had the potential to harm “national cultural security.” And of course, Bjork 2008 and Elton John 2012.

While the culture ministry’s zero-tolerance policy appears to have been successful in clamping down on potentially volatile incidents — some would write it off as specious reasoning — it has also resulted in headaches for local promoters and live music venue operators.

Meanwhile, artwork must be approved by CD manufacturers who engage in self-censorship and often hold up a product if they find it questionable. “The original cover design of our first record featured a man with a bloody axe holding Mao Zedong’s head,” a Beijing-based musician told us. “But because no factories in China would print this, the head was later changed to that of then-US president George W. Bush.”

The MOC is likely aware that they have to use discretion when it comes to which foreign recording artists constitute an acceptable level of risk management.

It also should be assumed — assume being the operative word, considering the opaque workings of mainland China’s inner sanctum — that there is bureaucratic infighting when it comes to building consensus and policymaking. And judging by the byzantine structuring of the MOC’s departments – there are 11 of them, each with vaguely-worded responsibilities and goals — no clear consensus exists as to how to efficiently set and execute policy. Better to pluck out the easiest targets and worry about consistency later.

PiL, by the way, was also screened. “The Chinese government asked me to send every lyric I have ever written and they surprisingly approved me,” the outspoken Lydon mused. “They have either incredible good taste or they have no idea what I’m going on about. I can’t wait to find out.” But the important thing isn’t what the 57-year-old lead singer has said, but what he has not. Namely, he’s never publicly supported (or planned to support) Tibetan independence movements or other anti-PRC causes.

“Don’t expect us to come there and tell you how to run your country — we’re not Elton John,” he told SmartBeijing earlier this month. “I’m coming as a human being. I’m not coming to tell you how to live your life. I’m coming to explain how I live my life. And that we will share.”

Don’t think you have it figured out, though. Life in the Middle Kingdom often defies logic, and it’s daft to presume that decisions and policies are made with any kind of consistent logic (see: 100 banned songs).

Acclaimed American noise-rock outfit Sonic Youth, for example, participated at the same aforementioned Tibetan Freedom Concert in 1998, yet managed to receive the visas necessary to perform in mainland China in April 2007 with minimal interference from the authorities, while a supporting outfit, the apolitical Beijing noise-rock outfit Carsick Cars, was forbidden to perform.

One Shanghai-based foreign musician told us that his band was given a lifetime ban by the organizers of the Midi Music Festival in 2008 before they had a chance to take the stage.

“It took [the organizers] nearly a year to tell us why they had axed us,” the musician, who requested to remain anonymous, wrote Beijing Cream in an email. “They ultimately told us that the Chinese translation of our band name was too controversial for the censors’ approval. While they did thank us for our support, they said that we would never be allowed to perform at a MIDI show with that name.”

The band later broke up and the members regrouped under a different handle that would be unlikely to trigger the censors. But in 2011, the musician said, they were among one of five bands who were prohibited from performing at another festival in Nanjing, the commercial and cultural powerhouse located three hours northwest of Shanghai by train.

“We were never actually given a reason for that cancellation,” he said, “but all the bands kicked off were foreign and I actually think this was less of a censorship deal than the promoter just messed up the permits. Still, it could be perceived that some of our lyrics were a little too edgy for the festival circuit.”

For all anyone knows — the MOC didn’t pick up our weekend phone call — foreign recording artists may very well be at the mercy of a young, apple-cheeked intern tasked with navigating concepts that they don’t entirely understand.

As Hunter S. Thompson mused in Fear and Loathing in Las Vegas when a hapless bar patron encountered the author licking LSD from a fellow cosmic traveler’s sleeve, “With a bit of luck, his life was ruined forever. Always thinking that just behind some narrow door in all of his favorite bars, men in red woolen shirts are getting incredible kicks from things he’ll never know.”

Perhaps the MOC is staffed with aged bureaucrats scared of what they do not comprehend. Or maybe all decisions are handed down by a disgruntled cadre who, while charged with sifting through Lydon’s lyrics sheets, found in the aging punk rocker a common spirit:

12 Responses to “John Lydon Is Controversial, Kraftwerk Is Not; So Why Ban The Latter? On China’s Whimsical Censorship Of Musical Acts”