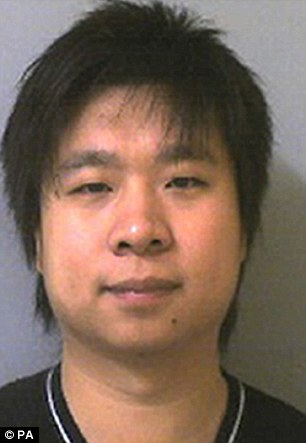 Pictured above is Yang Li (Li is apparently his surname; he appears to have a LinkedIn account under the name Jiao Yang Li). We don’t know much about him, but he made the news recently after allegedly trying to bribe a University of Bath professor — and carrying an “imitation firearm” into the meeting.

A court heard that Li, 26, was studying a masters degree in innovation and technology management and feared failure.

He was dismayed to learn he had been given just 37 per cent for his dissertation which was a fail – and would have meant him spending an extra year at the university.

That would have affected Li’s visa which he was hoping to upgrade from a student visa to a tier 1 visa.

Li, who was born and educated in China, asked to meet Professor Andrew Graves and Dr Stephen Shepherd to discuss his options.

Bristol Crown Court heard he told the pair ‘I am a businessman’ before placing £5,000 in cash on the table.

He then said: ‘There is a fourth option, you can keep the money if you give me a pass mark and I won’t bother you again.’

When that failed and he was asked to leave he picked up his coat and a 0.177 air pistol fell from the pocket.

The 26-year-old has been sentenced to 12 months in prison for bribery and six months for carrying a firearm, despite retaining excellent counsel, who said things such as:

Mr Li is someone who is used to carrying large amounts of cash with him…. He was not thinking straight, he made an impulsive decision to use the money he had on him, which was a ridiculous gesture and ill-thought through…. One of Mr Li’s pleasures is shooting in the garden of his house, and he intended to return to it after the meeting…. He had the gun in the pocket of his coat as he didn’t want to leave it in the car, he felt it was safer with him…. It was in no way connected to his meeting…. In his haste to leave the meeting, he picked up his coat and the gun fell to the floor.

Blake James, esq., also mentioned Li’s father is a “respected government official and businessman,” who we imagine is proud of his son. When Li eventually makes his way back to China, he’s going to find life so much easier. For now, though, a sobering reminder that he does not run the world, and money can’t buy him out of all his troubles.

8 Responses to “Son Of Chinese Government Official Tries To Bribe A UK Professor, Is Now In Jail”