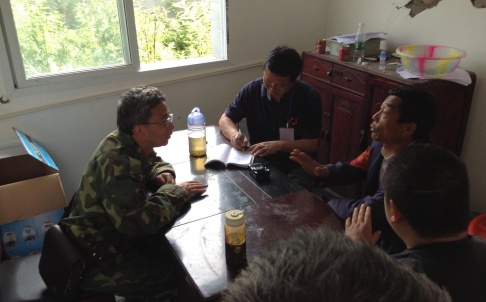 The first Chinese official to lose his job as a result of the Ya’an Earthquake is Yang Chengyi, 47, of Qingyuan township. Did he embezzle aid? Wear a gold watch? Smile while inspecting an accident site when he should have frowned?

According to SCMP, Yang was fired after failing to meet with disciplinary inspectors because he was busy working in the field.

Internet users applauded Yang’s down-to-earth working style, saying that officials like him should be promoted, not sacked.

Many wryly noted that doing nothing had become the common practice for party cadres.

Yang refused to comment on his own removal, saying he was too busy participating in relief efforts to discuss the move.

Lily Kuo recently wrote for Quartz about how being a Chinese official is one of the worst jobs in the world. On top of all the typical reasons (including those that are tongue-in-cheek), add “surrounded by incompetence” to the list.

There are plenty of reasons to punish officials, but “working overtime” shouldn’t be one of them. Or failing to attend a meeting… meetings, by the way, which are the bane of humanity. Look for Yang to get rehired soon, possibly by an office a little smarter than the one that just relieved him.

2 Responses to “When Good Officials Get Sacked, Like Yang Chengyi Of Earthquake-Stricken Qingyuan”