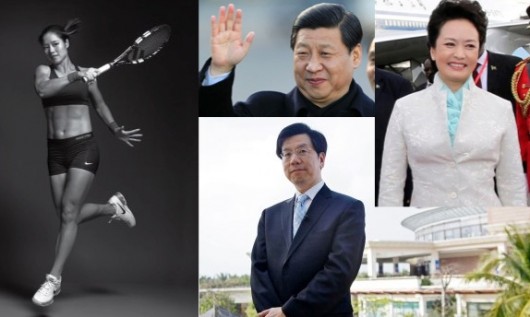 A politician, his wife, and a tennis star  join the likes of Jay-Z, Bryan Cranston and Kim Jong-un as the only Chinese citizens on Time’s annual list of 100 most influential people in the world. (Ahem, “world.”) You probably can guess, but the three are Xi Jinping, Peng Liyuan, and Li Na. Here are snippets of their profiles:

On Xi Jinping, by Henry Kissinger:

Xi is convinced his generation’s hardships gave it the strength to face the challenges of adapting China to the consequences of its success. He has put forward a sweeping reform program designed to move millions to the cities, streamline bureaucracy, reorient the economy away from state-owned enterprises and fight corruption.

On Peng Liyuan, by Hannah Beech:

On Li Na, by Chris Evert:

Li Na is a maverick. Who else would stand up to the centralized Chinese sports system as Li did, back in 2008, when she pushed for more control over her career? Li persuaded the Chinese Tennis Association (CTA) to start the “fly alone” policy, which gives players more independence. Now they keep more of their money, giving just a fraction of their earnings to the CTA, compared with the bulk before.

Also making it is Taiwanese American Kai-Fu Lee, who Dai Xu, that crazy Chinese colonel, recently accused of being an American spy. Arianna Huffington thinks Lee’s is a “universal story — of striving for freedom (online and off), of the power of technology to circumvent the status quo and of an individual’s potential to create new opportunities that benefit not only himself and his community but the wider world.” Yup, spy.