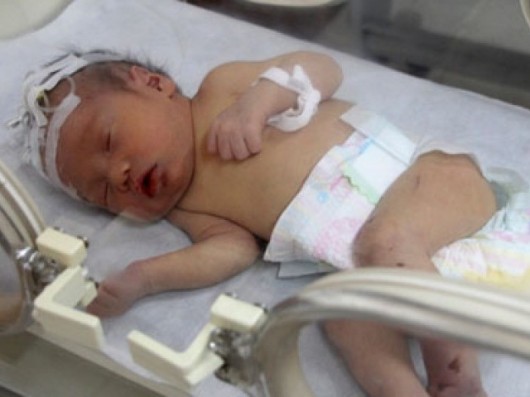 The Daily Telegraph reports that Baby 59, the resilient newborn who survived being flushed down a squat toilet, has been released from the hospital:

On Thursday morning, a hospital official who declined to be named, told The Daily Telegraph the child had now been released. “We just know that the family came yesterday, accompanied by county public security officers, and took away the baby,” he said.

But here’s where it gets complicated.

Citing an “inside source” at the hospital, the Qianjiang Evening News reported that on Wednesday night “a man who claimed to be the baby’s biological father appeared at the hospital and picked the baby up.” The local Metropolis Express claimed “the father secretly went to the hospital and picked up the baby when there were few people around.” Those accounts were contradicted by state-run CCTV which reported that the baby had been taken away by its 22-year-old mother who has not been named.

The hospital official said he did not know if “it was the father or the mother.”

On the much brighter side, the baby — as yet unnamed (when are netizens going to start an online competition to name it?) — is getting stronger by the day.

Zheng Yuzheng, the fireman who led the baby’s rescue, told The Daily Telegraph his condition had been gradually improving since being rushed to hospital on Saturday afternoon.

“His heartbeat is now normal and the bruises and injuries on his legs have been healing,” the fireman said on Wednesday. “The chief nurse told me that at first he would wake up crying every two hours. But since then he has been sleeping fine.”

We’re rooting for ya, kid.

One Response to “Baby 59 Has Been Released From The Hospital, But To Whom?”