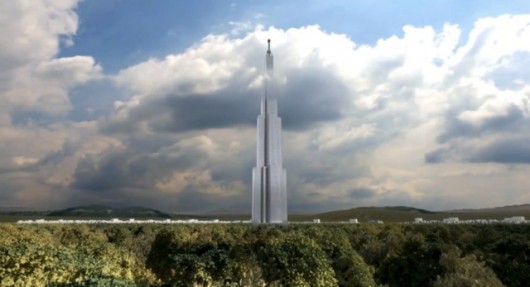 It’s finally happening. “Sky City,” by the Chinese firm Broad Sustainable Construction (BSB), will be 838 meters (2,749 feet) tall upon completion, making it taller than the Burj Khalifa by 10 meters. Whether it takes 90 days to complete — as BSB has advertised — or longer, it will nonetheless be a huge accomplishment, and another feather in China’s architectural cap. (We should note that Sky City was supposed to be complete by March, making it way behind schedule.)

Amanda R. of Two Americans in Changsha wrote about this last Wednesday:

I am excited for this. I am looking forward to it and hope it does happen. However, to think that this is somehow going to cure urban sprawl in China is a bit of a dream. The Sky City is being built about 45 minutes away from Changsha. It’s far more likely that the sprawl will actually spread as people move closer and closer to Sky City from Changsha. Sky City is going to offer thousands of job opportunities for people who won’t live in the building (housekeepers, nannies, tutors, plumbers, decorators, and so on), plus grocery stores, restaurants, and shops will be built in the surrounding area as well. It is fairly typical when large buildings/schools/factories/military bases are built in China that lower class neighborhoods quickly follow.

Quartz’s Lily Kuo reports that the building will essentially be its own city, bringing us a step closer to the sort of urban utopia that science fiction writers enjoyed imagining back in the day:

BSB likes to market the project as the “next step in urbanization.” It will house about 30,000 people in a 202-floor building that will also include offices, a hotel, a school, and a hospital—not to mention 92 elevators, a six-mile-ramp between floors, and 17 helipads.

So what does it mean that the building appears to be the only skyscraper within many, mnay miles, built in an isolated village? Cool? Eerie? Disturbing? Would you want to actually live there?

For more, check out the following promotional video. Also see this Treehugger article.