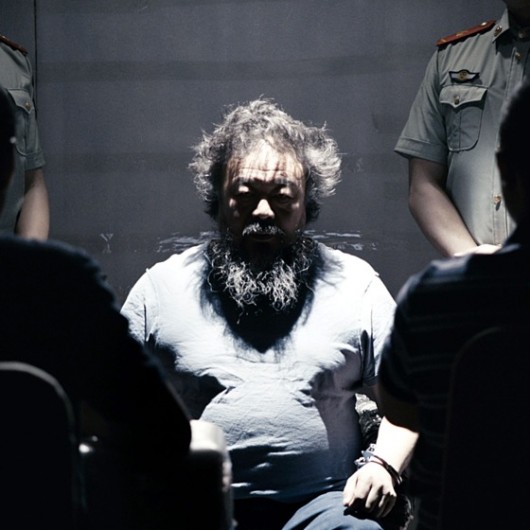 Directed by well-known Australian cinematographer Christopher Doyle — you may recognize his work with Zhang Yimou and Wong Kar-Wai — the highly-polished video offers a surrealistic interpretation of the 81 days that Ai, 55, reportedly spent in detention in mid-2011 for tax evasion.

In the five-minute flick, a disheveled and closely-guarded Ai goes through the mundane details of everyday prison life — slurping down noodles, showering, getting interrogated — before dissolving into expletive-laden fantasy sequences featuring blow-up dolls, strutting lingerie-clad models and a shearing given by a pint-sized prison protégé.

The video ends with a made-up Ai preening as he’s led to an unknown fate by a pair of guards, painting a speculative portrait of how we imagine the offspring of Uncle Fester, Chairman Mao and Divine would look if you combined their DNA, fertilized a turtle’s egg and hatched it in a subterranean mauve-colored incubation pod.

Ai says that this — the closely-guarded mundane activities, not the cross-dressing — reflects his detention experience.

While it’s become fashionable to bash the outspoken artist that the contemporary art magazine ArtReview has coronated the most powerful in the world for being a spotlight-seeking attention hound, we presume his decisions follow his own internal stream of logic, and we aren’t going to bash them here.

His creative choices, however, are fair game. It’s easy to forget that despite his status as a fawned-over global brand and perennial thorn in the Party’s side, he still is, first and foremost, an artist whose creative output requires public criticism in order to remain valid.

As discussion of the video continued to ripple online over the weekend, we reached out to members of the country’s independent music community to judge the song purely on its artistic merits.

Here’s what they said.

I guess it could charitably be described as nü-metal with subtle trip hop influences. But that’s not really the point, is it? As with that ridiculous “Gangnam Style” parody video he did, Ai proves he can at this point just phone it in, record that phoning in on his iPhone, post it online, and get it written about by the New York Times. Dude can make a haircut newsworthy.

This song is a real stinker. It was presumably written by formerly-awesome avant-rock star Zuoxiao Zuzhou (Weiwei’s pink-clad co-star in his Gangnam parody). For me, the sad part is that this will be the most internationally covered music to come out of China this year. Western journalists just love that dissident angle. All media wonks love writing about everything Ai does, like shooting a music video featuring himself taking a shit. Hey, look: I just fell into the same trap!

This is typical Zuoxiao Zuzhou: Dark, nervous and tight. It’s a cool song. And while the singer isn’t Zuoxiao but rather Ai himself (although Zuoxiao does sing some background vocals at the end), I think that the music in itself would be better if Zuoxiao sang for the duration: his off-tune and eccentric voice would strengthen it as a whole. However, Ai’s offbeat and Chinese karaoke-style vocal does makes the song more interesting…

This harkens back to nineties-era rock in China and early performers like Dou Wei, Tongue and No (Zuoxiao Zuzhou’s band), which makes sense as this is a collaboration with Zuoxiao. While the track might not be winning any awards in the international sphere, it does capture the essence of early Chinese rock — it’s an eclectic mix of ideas and styles jumbled together in a faux-innocent and naive way conveying raw emotion without sophistication.

From a Western perspective, the mixing of classical Chinese sounds with elements of metal and electronic music creates an ahistorical feel to the song. In a Chinese context, however, it heavily connotes a period of opening up and dizzying explosion of change that was China in the 1990s. This musical confusion is echoed by the confusion represented in the lyrics and works to support Ai’s critique of modern China.

The elements are there: a heavy metallic beat with an emphasis on trip hop. Drums take the lead, a flute brings the chorus around again and again, and Ai’s voice and lyrics bombard the song without the slightest bit of subtlety.

Does it add up to much? Aesthetically, it’s kind of a mess: none of said elements really mesh together into something cohesive and far-reaching. Granted, perhaps that’s the intent — and in fact, after a few listens, it has a kind of a ramshackle charm about it. But vocally, the man sounds terrible: he’s basically taken Zuoxiao’s signature off-key singing and made it jarring instead of intriguing. It’s in no way a train wreck, but with the talent involved, one would expect something that’s doesn’t feel forced, overproduced and overbearing.

I like this song, but probably not enough to listen to it that many times. I find the oddness of it pleasing. I like how unpredictable it is. It’s not particularly menacing or unnerving, and doesn’t evoke the sensations of horror and savagery that the industrial-tinged instrumental may have been aiming for, but it does convey what (I believe) Ai is trying to get across: a dominant impression of a man in distress.

Most music barely has a dominant impression. Most music just leaves me thinking, “I just heard a song.” Ai’s foray into music is pretty good in this regard: it has power and resonance and that deserves some credit.

I really did not like listening to this song. Maybe this is supposed to sound tortured to evoke Ai’s detention experience? It starts out like it could be a decent, kind of industrial song, and then Ai starts caterwauling over it — he sounds like he’s in the middle of a different song! And the overdubs near the end‽ Everyone has the right to make bad music, but I’m not sure he’s doing much to further his cause here.

“Dumbass” kicks off with strident guitar chords, airy synth and drumbeats that could easily be the opening strains of a random nü-metal number from a random band from anywhere. But then the vocals kick in and we’re thinking, ”Ai Weiwei is kind of a terrible vocalist.” That probably gives the song more of an edge because the words become such a focal point, and this really is all about the message, isn’t it? Zuoxiao Zuzhou actually does a great job putting together the medium through which this message is transmitted and his composition keeps your ear interested long enough to sit through Ai’s painful wailings. Is the comedic aspect of his singing deliberate? We think he might just be winking at us on this one.

People’s sentiments for Ai might be conflicting with their capacity for aesthetic analysis. (We could call it the “AWW Effect.”) While I sympathize with what I feel was his wrongful detention, I feel that Ai frequently reveals himself as a narcissistic bully. I take his works and opinions on a case-by-case basis, and in this case, the emperor of Chinese art appears to be naked.

The only good thing I have to say about the video is that the cinematography is mostly high-quality (to be expected, since it’s Chris Doyle). Other than that, I personally find nothing interesting, exciting, enjoyable or relevant about this “punk” song. This isn’t even punk music. It sounds like a glam rock parody. I can’t stand the voice or the thoughtless lyrics. We see images depicting detention, but there’s no real story in those images. But you never know with Ai. Maybe his purpose was to torture us.

Anyone who thought this was going to be an actual heavy metal album a) Doesn’t comprehend the idea of metal and b) Doesn’t care what, musically, the song and/or album sounds like. For these folks, the value of this project is the idea, not the execution, and it seems to me that Ai is also of this camp.

It’s disheartening that he shows no respect for music as an art form in the way he respects sculpture, photography, installation and other mediums. The whole thing, for me, comes off as a joke. And that’s a shame because if he put his mind to it, Ai could’ve come up with something truly interesting: Not music, per se, but at least an approach involving music.

Zuoxiao Zuzhou is the musical brains behind the operation here, and for me, the song is a perfectly fine Zuoxiao tune that’s ruined by the context out of which it comes. I’m no Zuoxiao fan, but I recognize the value of his work, here and throughout his career. But in this case, the lyrics, video and the Ai element ruin it.

As challenging, artistically, as Zuoxiao’s music is, it’s not challenging in a come-right-out-and-say-”fuck-you-the-Man” way. Like the best yaogun, it challenges authority anyway, because it makes people think, which is what great music — and art — is supposed to do. Ai has created some amazing art. But you wouldn’t know it in this case.

The Divine Comedy will be released on June 22. Pete DeMola is a writer and creative consultant in Hong Kong. He tweets @pmdemola.

18 Responses to “How Is Ai Weiwei’s Musicality? We Asked Chinese Music Experts”