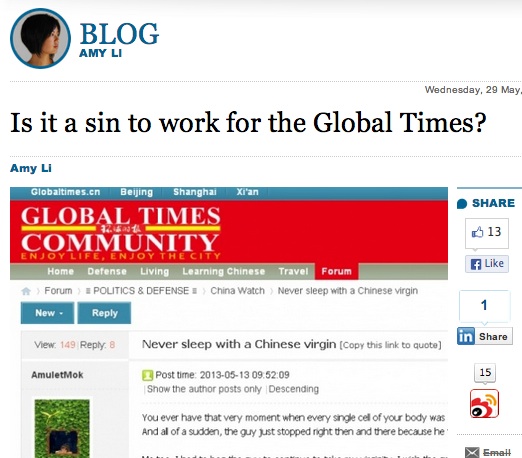 Wang asked what paper Zhang worked for and the response was harsh. Wrote Li: “Upon hearing the name Global Times, Wang said: ‘Then I don’t care’ and hung up.”

But is it a sin? Ms. Li should have asked at least two of her Chinese SCMP coworkers. Before “defecting” to the SCMP, and despite their “sin,” they both toiled through self-censoring managers under the Red Thumb and the imagined whims of the egomaniac and decidedly marmot-banged Global Times editor-in-chief Hu Xijin, who, Li wrote, also courts controversy. As Hu wrote on his Weibo following the Zhang-Wang spat:

“It’s nothing. Global Times has such a large circulation. [Note: without a specific number -- it’s always been a mystery.] Its website is the largest besides [state tit] the People’s Daily. Confidence helps people maintain their manners.”

Hu thrives on attention, good or bad, as long as they spell his name right. To his small credit, he did “liberalize” the English language version from the rabid Chinese version, albeit with very mixed results. The opinion page continues to suck dead rats and draws the most negative attention, but if one sifts through the news pages there are still some gems.

GT has run stories that China Daily (where as a PR for the PRC hack I also worked) would never touch. Maybe my proudest two moments at GT were finally getting the foreigners paid on time and killing a story headlined, “Incest Around the World,” based on an old Austrian-based story about the animal who imprisoned and fucked his daughters for years. It was neatly summarized according to countries and incest relationships. Guess which country was omitted? “It’s a Small World After All (Except China)” kept ringing through my head as I read it.

As the first foreigner hired at GT-English, I recruited both of those two previously alluded to SCMP reporters after working with them separately in Hong Kong and Shenzhen. I admit, I felt a bit guilty as I couldn’t exactly figure out why they wanted to be a part of what would become the ultimate clusterfuck, but felt they could make a difference. But in their time they did a helluva job, inspired younger reporters and ultimately went on to the SCMP, which has had its own managerial and self-censored sins to consider.