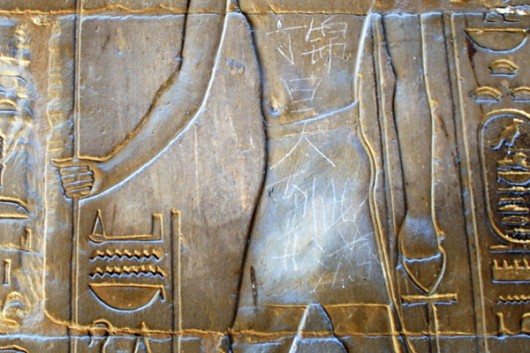 If you’re going to deface an ancient artifact in Luxor, Egypt, it’s best not to use your real name. That’s the lesson we’re learning from the Ding Jinhao incident.

A microblogger named Shen, visiting the Luxor Temple earlier this month, noticed Chinese characters scribbled over a sandstone relic alongside hieroglyphics. Mortified, Shen posted a picture of this vandalism onto Sina Weibo, where it went viral. Netizens were furious, claiming the incident was a “loss of face” for the Chinese, according to China Daily.

Ding Jinhao was recently revealed to be a 14-year-old middle school student in Nanjing, Jiangsu province. (Some English media have reported he’s 15.) The boy, reportedly distraught, has made no public comment, but his parents have apologized on his behalf. China Daily:

“We want to apologize to the Egyptian people and to people who have paid attention to this case across China,” Ding’s mother said in Modern Express, a local newspaper.

Ding has realized the seriousness of his misconduct, according to his mother.

His father said they felt regretful after news about the case was spread online.

News of this incident comes only days after one of China’s vice premiers, Wang Yang, asked his citizens to observe “polite tourist behavior” when traveling abroad. As International Business Times reports:

“Improving the civilized quality of the citizens and building a good image of Chinese tourists are the obligations of governments on all levels and relevant agencies and companies,” he said in a transcript published last week on the website of the People’s Daily, the mouthpiece of the Chinese Communist Party. “Guide tourists to conscientiously abide by public order and social ethics, respect local religious beliefs and customs, mind their speech and behavior … and protect the environment.”

So you probably can figure out that Ding isn’t the first Chinese tourist who’s behaved poorly around heritage sites. Closer to home earlier this month, a man broke the glass to a Forbidden City display and acted generally crazy.

Ding, it can be argued, committed a lesser sort of error: the type that middle schoolers sometimes make, regardless of their nationality. Adults are wont to act as uncouth, and sometimes more egregiously so. As Shanghai Daily notes:

Following the Ding incident, online posts claimed that Song Yin, said to be a senior reporter with the Hong Kong-based Wen Wei Po newspaper, had engraved similar words in a Dunhuang fresco in northwest Gansu Province.

A photograph showing the words: “Senior reporter of Wen Wei Po Song Yin was here for research in lixia in 2000.” Lixia is a Chinese solar term referring to the beginning of summer.

At some point, people will get it: no one cares you were there, or anywhere. At least, you better hope they don’t.