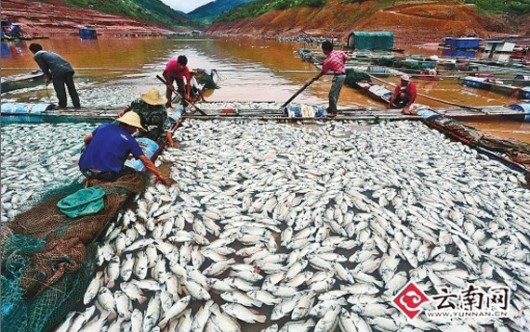 Thousands of fish have been dredged out of a reservoir near Sinan River Power Station, a hydroelectric dam in Yunnan province. How many thousands? Whatever 1,177 tons comes out to — about half a million, give or take many thousand.

The deaths began on May 20, according to Yunnan Net. Five days later, 1,177 tons of fish, mostly tilapia, were dead, including 3.6 million fry. The economic losses are estimated at 13 million yuan.

The cause was a sudden decrease in water level, leading to severe oxygen depletion, a condition known as aquatic hypoxia. There are both natural and artificial causes for hypoxia, but the article does not explicate the specific cause of this particular environmental disaster. At least these fish weren’t blasted dead in the water.

Experts and cleanup crew have been flocking to the area to disinfect and offer comfort for the fishermen. Meanwhile, efforts are being made to ensure this doesn’t happen again, with households each being distributed oxygen powder for their fish farms.

One Response to “1,177 Tons Of Fish Dead Of Oxygen Deprivation Near Yunnan Hydroelectric Dam”