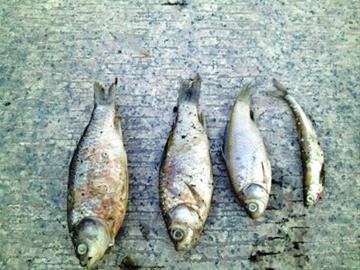 Another variety of dead creature has been fished out of Shanghai’s waters in bulk. Over the last three days in Songjiang District, about 300 kilograms of dead fish (“500 to 600 jin,” say media) have been dredged out of a dike between the Si and Jing rivers. Authorities speculate that the cause may be have been illegal blast fishing.

A reporter for the National Digital Culture Network arrived at the scene on Saturday afternoon, at Jiangchuan Road in Sijing Town, and witnessed specialists clearing out large quantities of dead fish. The salvage operation was basically complete that day, although further cleanup is necessary, since wayward bodies have floated downstream, got entangled in reeds, etc.

Authorities have yet to provide an official reason for the decimation — though, again, speculation is that blast fishing may be the cause (one sees why it’s highly illegal). An environmental protection bureau said there are no chemical or sewage companies nearby, and water tests have not turned up abnormal results. In other words, the water isn’t poisonous and remains drinkable. Whether you care to drink any — in light of all the dead pigs, ducks, and human bodies — remains up to you.

Residents said floating dead fish were first found on April 1 and washed up in abundance along Sijing Pond and Dongjiang Harbor in the next few days.

An official with Songjiang Water Bureau, surnamed Gao, speculated the fish had been drugged because small fish died first, followed by the death of big fish in groups.

…Some believed the fish were electrically shocked, possibly by illegal fishers, or were affected by climate changes. 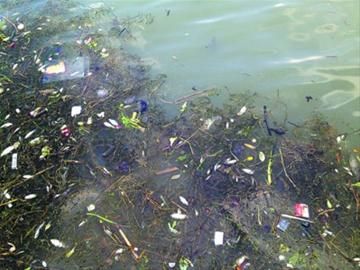