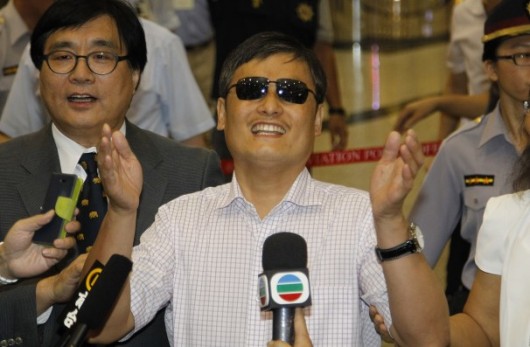 Chen Guangcheng, who is in Taipei right now as part of an 18-day trip to meet with politicans and human rights activists, spoke to media on Monday but notably refused to follow-up on his claim that New York University kicked him out due to pressure from Beijing.

According to Reuters, Chen “bristled” when asked.

“Why do you keep asking about NYU?” he asked. “I’ll wait till a more suitable time to talk.”

In fact, as early as last August and September, the Chinese Communists had already begun to apply great, unrelenting pressure on New York University, so much so that after we had been in the United States just three to four months, NYU was already starting to discuss our departure with us.

– we might have been spared this entire sad saga in which a human rights champion seems like he’s grown into a new role as ungrateful, puppet dissident.

Chen was also asked about spyware on his phone, which he said he didn’t know about. “I’m not a PC expert,” he said — in deadpan, we can only imagine, and not bristling.

He also had this to say about Taiwan President Ma Ying-jeou’s refusal to meet him:

“This is exactly an example of how a dictatorship threatens a free society,” he said.

Doesn’t sound like Chen completely understands international politics. And what would he do, anyway, force President Ma to meet? That seems rather — what’s the word? — dictatorial.

9 Responses to “Chen Guangcheng Meets Media In Taiwan, Refuses To Talk About NYU”