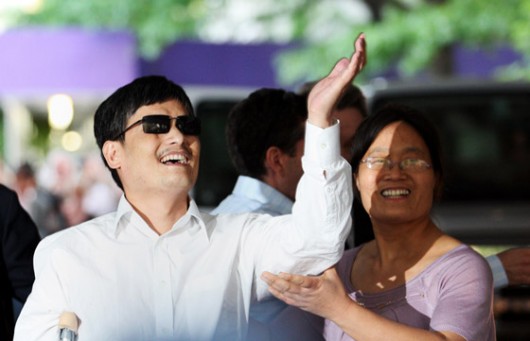 Last May, lawyer-activist Chen Guangcheng was a media darling and international hero. His dramatic escape from the village of Dongshigu, where he was held under house arrest, made headlines around the wrold. After the US granted him asylum, one magazine recognized him as “rebel of the year.” Be was later honored with the Lantos Human Rights Prize.

But as time went on, something changed. Or rather, Chen failed to. With each video, each interview, we heard more of the same, the same not-so-subtle name-drops, the same message, with phrases such as “the red terror envelops the nation.” He was almost parroting leaders of the overseas dissident community, which include pro-lifers, Christian evangelicals such as Bob Fu, and those who believe in aliens. (To be fair to Chen, he has always seemed caught between opposing factions, and it’s sometimes difficult to tell exactly where he stands on certain issues. “Human rights,” of course, can have radically different meanings to different people.) China, meanwhile, has done itself no favors, as officials have continued to harass Chen’s relatives in Shandong province, making it difficult, if not impossible, to see them as anything but villains in this ongoing saga.

This brings us to today’s news, which has been greeted with markedly mixed reactions. The New York Post, in typical New York Post style, is reporting that NYU is “booting” Chen (check out the URL: “nyu_has_bad_case_of_china_syndrome”). Chen’s free ride is over, it seems. An anonymous source strongly suggests to the Post that NYU succumbed to pressure from the Chinese government, though the only reason to think so is because the university is trying to open a Shanghai campus.

“The big problem is that NYU is very compromised by the fact they are working very closely with the Chinese to establish a university,” according to one New York-based professor familiar with Chen’s situation, who spoke on the condition of anonymity.

“That’s their liability,” the source said. “Otherwise, they would be much less constrained on issues like freedom of speech.”

This is probably bullshit. None other than Jerome Cohen, the NYU law professor who played an integral role in securing Chen a fellowship at his university and is as close to him as anyone, basically said as much. As he told New York Magazine:

“No good deed goes unpunished,” he said in a statement to Daily Intelligencer. “My understanding with the Chens was that NYU could guarantee him one year in order to get their feet on the ground and transition to a more permanent position.”

“He now is in the process of choosing between two attractive opportunities,” Cohen added. “No political refugee, even Albert Einstein, has received better treatment by an American academic institution than that received by Chen from NYU, and I am grateful to the university administration for its extraordinary generosity, which could not reasonably be expected to go on indefinitely.”

UPDATE, 1:05 am: From Max Fisher of the Washington Post: “Cohen said that he had ‘never heard a word from anyone, including Chinese diplomats’ suggesting that the Chinese government was pressuring NYU to end Chen’s tenure there…. As Cohen points out, it would be very odd for the Chinese government to grant its permission for Chen to leave the country and then try to pressure NYU to push him off of its campus: If China can live with Chen taking his family to U.S. soil, surely it can accept his status at New York University law school.”

A university spokesman, John Beckman, denied any connection between Chen’s soon-to-be departure and NYU’s expansion to China. As he told the Post:

“If there were outside pressure, why would we have taken him in the first place when his plight was on every front page in the world?”

Buzzfeed has a fuller statement:

The plain fact is that these are unrelated matters. In countless hours of conversations involving the establishment of our Shanghai campus, this matter has never come up.

We were pleased to offer Mr. Chen and his family a place to come and study and support his transition to the US when he first left China based on a pre-existing relationship he had with scholars here. But NYU and Mr. Chen had discussions beginning last fall that NYU could not support him indefinitely. We indicated that beyond this academic year he would need to make a transition to a more self-supporting life – with which NYU would and has been helping him – which would involve him finding new living arrangements and completing a book that would be a source of income for his family. During Mr. Chen’s time here, NYU has been very generous, providing him and family with housing, health insurance, health care, food, clothing, electronic equipment both related to his blindness and for his family, as well as family, office and language translation support, and arranged opportunities for him to speak and write.

The claims in the story that Mr. Chen’s advocacy was restrained are also completely untrue, as the record amply shows.

Chen, by the way, will be fine. Reports are that he’s in talks to move to Fordham Law School. If not there, someone will give him a home, because he’s Chen Guangcheng, Rebel of the Year, Lantos Human Rights Prize recipient. It’s unlikely he’ll have to earn anything again for the rest of his life.

9 Responses to “Chen Guangcheng Is Being Asked To Leave NYU, And We Should All Be Okay With That”