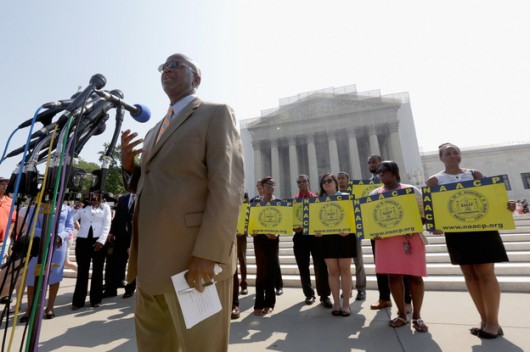 You know why Chinese media shouldn’t be writing about African American suffrage? Because, lacking historical context and understanding of American society, they’re likely to misinterpret facts, or run a piece headlined, “A federal state of the United States cancels African-American suffrage.”

“While certain parts of the article were accurate,” reports SCMP, “CRI’s overall interpretation of the news was wrong - it was not the Alabama Supreme Court that had passed the decision, but the US Supreme Court, which declared in a 5-4 decision on Tuesday that certain sections of the Voting Rights Act of 1965 were outdated, calling for a revision of the law by Congress.”

The Voting Rights Act of 1965 outlawed discriminatory practices that had disenfranchised black voters. It has nothing to do with suffrage, which is the right to vote. Anyway, that word maybe was just a mistranslation?

The original report is no longer viewable on the CRI website. Before it was removed, it was picked up by several other news agencies until the Chinese edition of Voice of America addressed the mistake on Thursday. It published an editorial that called CRI’s website an “international joke” and criticised the article as a “misinterpretation and distortion of American politics”.

Sina Weibo netizens have also vocally attacked the article, which has been re-posted dozens of times on the social media network.

“This is pure disinformation,” one user posted.” No doubt about it.”

CRI can’t even blame this one on satire.

China state media report ‘US cancelling blacks’ voting rights’ in another blunder (SCMP) (Image via NPR, where you can read more on the Supreme Court’s decision.)