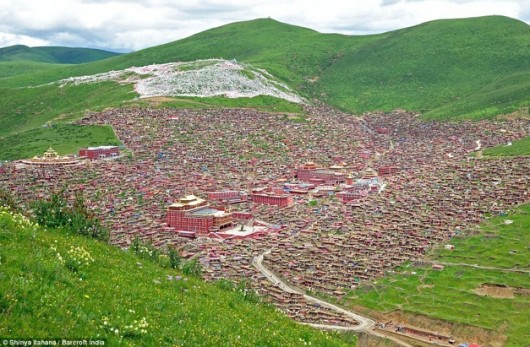 There are towns that look like the above; Larung Valley, Serthar County, Tibet, via Daily Mail

Rain or shine, links go on. Enjoy dazeFEAST this weekend.

Unverified story, but if true, reality worthy of fiction: “Recently, a netizen revealed that because the weather is so hot in Wuhan, it led to a couple broadcasting a ‘romance action film’ [having sex] by the window to keep cool. Unfortunately, these two didn’t seem to notice the window was of poor quality in their moment of pleasure. Just as they were in the throes of passion, the window suddenly broke and the two of them falling out the building and died, leading to an irreversible tragedy. However, the source and authenticity of this incident has yet been verified.” (chinaSMACK via NetEase)

About that hostage situation – “more common than most think.” “In the meantime though, how worried should you be?  Not that worried. And here is why.” (China Law Blog)

Good English teacher. “According to Guangzhou Daily, an Oxford-graduate identified only as Neil* has guided a Gaokao class at Shimen Middle School in the city’s Nanhai District to eye-wateringly impressive grades. // The class, senior 3 class 16, of which Neil is the form teacher boasts the student Li Ying, who was the second top liberal arts performer in the city. And she is just the tip of the iceberg.” (The Nanfang)

SIGH. So close to being good… “Professor Jiang Shigong, in an emotionally charged address (in Chinese), warned students to shun the popular path pursued by former law graduates: to study at US law schools and climb the corporate ladder in Western firms. Instead, Jiang encouraged them to think beyond the paycheck and work towards establishing a new world order — one with a staunch nationalistic tone.” (SCMP)

Death sentence sought for infanticide. “Five lawyers on Wednesday filed an application to four government agencies in Nanjing, Jiangsu Province, for information disclosure on what role local officials played in the case that saw two children allegedly starved to death at home due to a lack of guardianship. // Two girls, aged 1 and 3, were found dead on June 21 by Wang Pingyuan, a police officer. The children’s father had been jailed and their mother, an unemployed drug addict surnamed Le, had disappeared.” (Global Times)

The shadow of Edward Snowden. “The abrupt departure from Hong Kong on Sunday of Edward J. Snowden, the American former national security contractor, with the explicit approval of the Hong Kong government, has drawn the ire of the United States. But in Hong Kong the focus remains on Mr. Snowden’s exposure of American intelligence-gathering operations in Hong Kong and mainland China. // Leung Chun-ying, the territory’s chief executive, has called repeatedly for the United States to explain its surveillance activities here, brushing aside White House criticism that Mr. Snowden was allowed to fly to Moscow despite a pending American request for his arrest.” (NY Times)

“Are Chinese netizens on Weibo just a bunch of “three-low” losers?” “That seems to be the conclusion made by the News and Communications Research Center under China’s Academy of Social Sciences (CASS). The Center released its 2013 China New Media Development Report yesterday, and Chinese netizens are not happy with what they read about themselves.” (Offbeat China)

Man of leisure! “Apparently not satisfied with that feat, Kim (Jong-un) now wants his army to turn nearby Wonsan into a summer destination for tourists, South Korea’s JoongAng Ilbo newspaper has reported.” (The Telegraph)

Gay marriage and China. (The Atlantic)

The China and Internet and corruption. (SCMP)