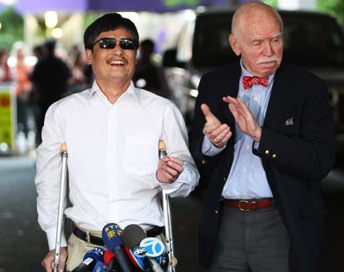 Regarding Chen Guangcheng’s exit from NYU, we acknowledge that there’s a chance he and his camp know something the rest of us don’t. Yet if there is evidence of coercion from Beijing, neither Chen nor anyone else has been able to present any. “Chen did not respond to repeated requests for evidence of his claims,” reports SCMP. In the same article, NYU professor Jerome Cohen gave perhaps the most withering sound bite yet about this situation:

Jerome Cohen, a law professor who has been Chen’s mentor and arranged for him to study at NYU, said he had “failed as a teacher.”

In a longer interview with Foreign Policy, Cohen clarifies his position on the matter (variations of these quotes appear in other publications, basically any one that has rung up Cohen):

I asked him to issue this statement [to express his views on what happened]. That said, he’s a special person, and he bears a certain resentment. He’s obviously being guided by people who have a different point of view than my own, and maybe they have information that I don’t have.

The irony of this whole thing is that I share a concern of [the Chinese government interfering in institutions] outside of China, but I always try to do it on the basis of evidence and facts. What concerns me here is that the New York Post, or something that Congressman Christopher Smith says, or NYU faculty opposed to [NYU President John] Sexton who don’t have anything to do with China, or Chen’s statement, no one has given one fact [to show that] Chen has been restricted or not done much at NYU. It’s all nonsense!

You shouldn’t bite the hand that feeds you. NYU has been extraordinarily generous to the Chens, and I’ve been grateful for the support.

I hate malicious gossip. People just say things, they talk. It’s very unfortunate. If I had seen a basis for [NYU restricting Chen] at all, I would have been the first to raise the alarm.

I don’t know what will happen after this — it could hurt him with some people – but he has to learn that there are consequences of free speech. You can say anything in America, but you have to learn that it can come back and bite you.

“Obviously being guided by people who have a different point of view than my own.” “Malicious gossip.” “There are consequences of free speech.” “It’s all nonsense!”

For a person of Cohen’s reputation, with his access to Chen, these measured but stern rebukes can almost be called scathing.

We may have to remember back to the era of the Tiananmen dissidents – Wu’er Kaixi, Chai Ling and others – to find a good analog for Chen. They came to the US after the massacre, were lionized for a while as the heroes of the “Democracy Movement,” and then faded from public attention in fairly short order. As that happened, they became vocal and bitter, complaining just like Chen, that they were betrayed, that the cushy welcome they received was evaporating as memories faded. In short, they learned (as Jerry Cohen liked to quip at East Asian Legal Studies lunches to the invited speakers) that “there is no free lunch.” After a reasonable transition, they were supposed to find something to do, on their own. In Chen’s case, he’s had a pretty sweet deal – a year of housing in Washington Square, financial support, translators, educational opportunities if he chose. Understandably, he’s unhappy. But biting the hand that fed you – well, for a year – makes Chen seem like an ingrate.

And the best tweet yet I’ve seen on the matter:

WSJ has the full text of Chen’s statement.

Jerome Cohen on Chen Guangcheng: ‘You Shouldn’t Bite the Hand That Feeds You’ (Foreign Policy)

7 Responses to “Jerome Cohen And Others Respond To Chen Guangcheng, More Sternly”