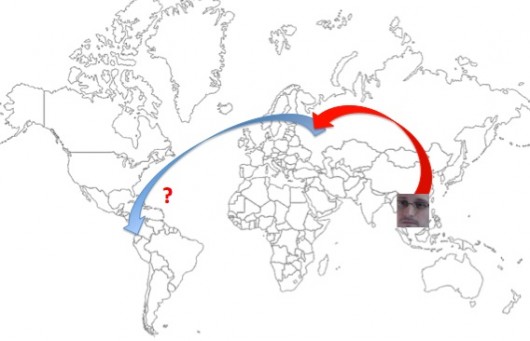 Edward Snowden — ever elusive, unidentifiable — is reportedly leaving Moscow for either Cuba or Ecuador. Reports AP:

The former National Security Agency contractor and CIA technician fled Hong Kong and arrived at the Moscow airport, where he planned to spend the night before boarding an Aeroflot flight to Cuba. Ecuador’s Foreign Minister Ricardo Patino said his government received an asylum request from Snowden, and the anti-secrecy group WikiLeaks said it would help him.

Meanwhile, the US — in the condescending way of superpowers who aren’t used to getting snookered — sent an official to say this to Reuters:

“The U.S. is disappointed and disagrees with the determination by Hong Kong authorities not to honor the U.S. request for the arrest of the fugitive.”

Chen Guangcheng, you say? Who’s that?

At no point in discussions through Friday did Hong Kong raise issues regarding the sufficiency of the U.S. arrest request, the official said.

“In light of this, we find their decision to be particularly troubling,” the official said.

On behalf of the rest of the world: piss off, anonymous official.

Diana Feinstein, chair of the Senate Intelligence Committee, went on CBS’s “Face the Nation” and said this:

“China clearly had a role in this, in my view.  I don’t think this was just Hong Kong without Chinese acquiescence.”

“I had actually thought that China would see this as an opportunity to improve relations and — extradite him to the United States… I think it’ll be very interesting to see what Moscow does with him.”

Interesting to see what Moscow does with him… as if — even if Snowden weren’t already on his way to Ecuador — Russia would risk political capital just to appease the government of the United States. What year are we in, 2002?

“Whatever his motives are, and I take him at face value, he could’ve stayed and faced the music. I don’t think running is a noble thought.”

No doubt, everyone in the world should put their unwavering trust in the US justice system, which has never failed anyone, ever. Ahem. Ahem.

13 Responses to “Edward Snowden Headed To Cuba Or Ecuador, US “Disappointed” In Hong Kong”