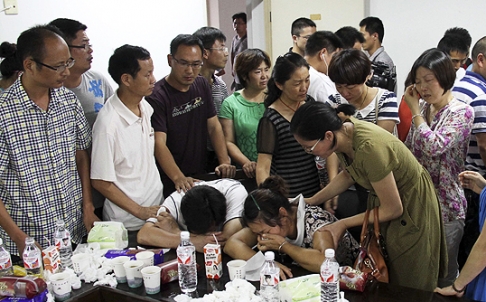 Family and friends have begun to mourn the loss of 16-year-olds Ye Mengyuan and Wang Linjia of Jiangshan, Zhejiang province, the only two fatalities in the Asiana Airlines 214 crash on Saturday in San Francisco.

The New York Times and Associated Press both have stories worth reading on this matter. First, AP (which lists Ye’s age as 17):

The two Chinese teenagers who died in an Asiana Airlines plane crash in San Francisco were student leaders who excelled in their studies and in the arts – one was a calligrapher and the other a pianist.

Wang Linjia, 16, and Ye Mengyuan, 17, were students at Jiangshan Middle School in eastern China who were travelling on a summer camp programme organised by the school to visit universities in California, state media reported on Monday.

The group included 29 students and four teachers from four schools in the city of Jiangshan. They were to visit Silicon Valley, Stanford University and University of California’s campuses in Los Angeles and Berkeley as part of an English-language programme, according to the Youth Times, an official newspaper in Zhejiang province.

Online, Wang Linjia had posted that she hoped time could dilute “the thick coffee in her cup,” perhaps easing some sadness about separating from her classmates for the coming school term back home. Ye Mengyuan had written just days ago that she was “gloomy,” but other posts hinted at a brighter side: a love of dogs, of animation and of Japanese, Korean and American television.

The girls and their classmates were part of a wave of thousands of affluent Chinese children who come to the United States each summer for language study and cultural immersion, many passing through California on their way to tour Ivy League campuses, go swimming, eat chili dogs and practice their English.

“Those two could’ve easily been girls coming to my camp,” said Steve Haines, who runs Horizons USA, an immersion camp for international students near Philadelphia. “I have plenty of girls just like them.”

Meanwhile, the latest report is that one of the victims might have died after getting run over by an emergency vehicle. Reports Reuters:

San Francisco’s medical examiner is now conducting an autopsy to determine the cause of the girl’s death, fire department spokeswoman Mindy Talmadge said.

“One of the deceased did have injuries consistent with those of having been run over by a vehicle,” Talmadge said. “Many agencies were on the field yesterday.”

Others were not so sensitive, such as a South Korean TV host who reportedly said it was “lucky” that the dead passengers are Chinese and not Korean. Reports Sina:

This appalling comment has sparked strong criticism from Korean TV audiences, with many found it to be improper and questionable, and some even accuse the host of being “inhumane.”

Not surprisingly, the South Korean host and his remarks have also stirred the anger of Chinese people. He is currently the target of Chinese Internet users, many of whom demand an official apology.

That apology should definitely be forthcoming. UPDATE, 7/9, 12:48 pm: As predicted, Channel A has apologized.