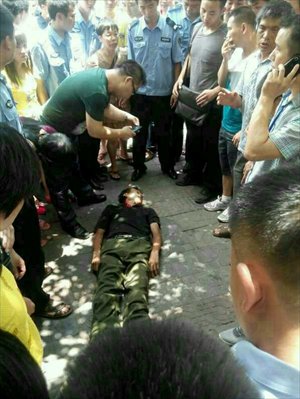 Deng Zhengjia, a fruit vendor, died suspiciously on Wednesday after scuffling with chengguan, i.e. this country’s much-maligned urban management officers. His family claims he was killed after a blow to the head by an officer — a charge that chengguan denied yesterday. Reports Global Times:

A county chief from Chenzhou, Hunan Province Thursday said there is no evidence a local fruit vendor was killed due to a blow to the head during a physical conflict with a team of urban management officers, or chengguan, despite accusations from the dead man’s family members and witnesses.

But chengguan in China have somewhat of a credibility problem, thanks to incidents like this, so the people’s response has been to riot. Fruit vendor dies, police involved, riots ensue… hmm, where have we seen this before?

Leave it to SCMP to make the connection obvious:

One netizen compared the Hunan watermelon seller’s fate to that of the Tunisian vegetable vendor Mohamed Bouazizi, whose vegetable cart was seized by police in Sidi Bouzid in 2010. In desperation, he set himself on fire. His death triggered the fall of Tunisia’s authoritarian regime of Ben Ali and those in three other countries, so far.

The odds of an Arab Spring happening in China anytime soon, as we’ve documented before, are slim, but they’re basically none in this case. Chengguan have always been seen as extralegal, so the battle here may be one against organized thuggery rather than the state.

What a battle that could be, though. Everyone knows the chengguan system needs reform — better training for the officers, better pay to attract better talent, etc. — but inertia has largely kept the current structure in place, ensuring bad apples will continue to cause embarassing incidents. Isn’t that right, Global Times op-ed writer?

Violent law enforcement by a minority of chengguan is caused by their personal qualities as well as the complexity of their duties. If the violence of chengguan is proved to be the direct cause of Deng’s death, then this will become a criminal case. Noticeably, it has nothing to do with the chengguan system.

Well then. We eagerly await the next bout of violence involving a “minority of chengguan.”

A Chinese court on Friday sentenced four municipal security officers to prison for a clash that left a watermelon seller dead and triggered a public outcry.

The Yongxing County People’s Court said in a notice on its website that the four officers were convicted of intentional injury and sentenced to prison terms ranging from 3.5 to 11 years in prison.

4 Responses to “Chengguan Deny They Killed Fruit Vendor, No One Believes Them”