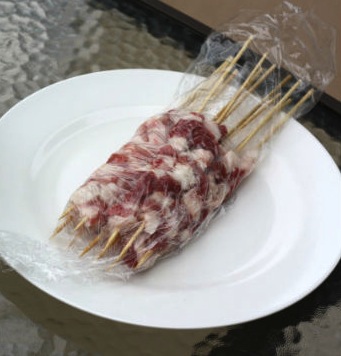 This story was never good to begin with — authorities crack down on street barbecue vendors, who by the way may be passing off rat meat as lamb skewers, because they think street barbecueing contributes significantly to air pollution – but the folks in charge have found a way to make it worse: more chengguan are expected to deal with this issue, because now fines are serious, as in quadruple what they used to be.

The new regulation proposes that the maximum fine for outdoor barbecues be increased to 20,000 yuan ($3,528) from the current 5,000 yuan. Authorities also confirmed that barbecue stalls should be excluded from downtown public areas, such as streets and plazas.

Not to be cynical, but how many more chengguan fight videos will we see?

Meanwhile, chengguan, or urban management officers, will continue their efforts to force street barbecue vendors to move on from public areas.

Anyway, the proposal is in its debate phase right now, so it’s not finalized. It’s not much of a “debate” though, and we know this because of common sense.

The lesson here, as we should have learned from the very beginning, is to never eat yangrou chaunr while sober. Alcohol kills all diseases though, as everyone who’s gone through college knows, so wash it down with those 15-kuai street mojitos and you’ll be just fine. The fake alcohol may cause blindenss though, so watch out for that!