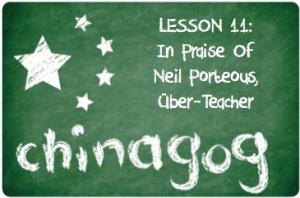 Neil Porteous is a teacher who knows how to get things done, and he might be the most dedicated foreign teacher I’ve ever heard of or met in the Middle Kingdom (more on that later). To wit on my first point, as Xinhua reports:

All 45 students in his class in Shimen High School in the city of Foshan, south China’s Guangdong Province, passed with good enough results to access the country’s key universities.

Six of them ranked among the top 100 in the province, where 727,000 students took the exam, also known as gaokao.

That’s a staggering level of success for any teacher, much less for someone teaching to a test infamous around the world for its inanity and focus on rote memorization. College entrance exams anywhere carry an enormous amount of pressure for high school kids, but if you fuck up, say, the SAT in the US, it won’t kill your intended career or negate the years you’ve already spent in education. However, in a country like China, where there are only a handful of top universities and your opportunity to get into those universities is tied to your hukou and gaokao score, pressure to succeed is turned up exponentially. Students in China spend the first eighteen years of their lives being turned into mindless, downtrodden learner automatons. Working in a private language school, I never got to spend a lot of time teaching high schoolers, but the stress of being a Chinese student showed even on the faces of my eleven- and twelve-year-olds.

What’s amazing about Mr. Porteous is that he was able to push his students to succeed by going vigilante, transforming into Batman with a whiteboard and marker and turning Chinese education on its head. According to Porteous’s students, “[He] never [forced] us to do anything, and his student-oriented thinking should be acknowledged.”

“Seeing us buried in schoolwork, he brought us fruit, chicken soup, porridge and Italian food. He even played guitar and sang for us sitting on stairs,” Zheng recalled, adding that such “seemingly rebellious acts” helped ease the pressure that is put on students.

By most standards of the coveted elements of “Western education” that foreign teachers are hired for their supposed ability to provide, Neil Porteous’s methodology is far from unorthodox. Going to school in the US, I had so many teachers with (effective) “outside the box” approaches to education that I have a hard time remembering all of them. There was Mr. Thomas, who kept a dangerous (and borderline illegal) geology lab on my high school’s campus. Instead of writing a paper or concocting a lame experiment for our final project, we spent a full day in the Colorado School of Mines Edgar Experimental Mine, where we spent the day operating heavy machinery, drilling with big fuckoff drills, setting explosives and examining rocks we’d cracked out of the walls of the mine ourselves. At the end of the day, one lucky student got to push a detonator while a pure bass explosion pulled in a lungful of air and shot it back out in a couple of short, terrifyingly awesome seconds. Another teacher, Mr. Hilbert, ran his AP English class with the rigor of a football coach. After all of our class passed the test with high enough marks for college credit, his only lament was that we wouldn’t get a banner raised in the gymnasium for our accomplishment.

To say my favorite teachers weren’t unorthodox is in no way an attempt at a backhanded compliment; I was lucky to have a lot of great teachers who approached learning with a special kind of creativity. What makes Mr. Porteous stand out is that he was able to implement such, well, different teaching methods in a Chinese public high school. Eschewing the traditional dancing monkey or pronunciation guide role that most foreign teachers are expected to fill in Chinese public schools, Porteous took full control of his classroom and refused to compromise with the local education standards (which is absolute shit in most cases). He got himself promoted into an academic advisory role and seems to have spent a lot of time relieving the crippling pressures of taking the gaokao. The fact that a school would cede that much control to a foreign teacher is incredible given the education system in China, and I think makes a great argument for why foreign instruction shouldn’t be segregated from Chinese instruction.

The justification for issuing work permits to foreign teachers is that they fill a role that a local teacher could not, mostly based on their (supposed) native speaking ability. That’s flawed logic, and I think it holds a lot of great teachers back from realizing the full potential in their students. I put a lot of work into making sure my classes were fun, effective and different from how my students were learning during their day jobs, but foreign teachers are never made to feel like anything more than a supplement, something to give students a slight competitive advantage over their peers. I had my students for two hours a week at most, while they spent the rest of their educational life watched over by strict Chinese teachers who’d sooner throw chalk and “kill the chicken” rather than think a millimeter outside the box.

I suspect it’s the same for most foreign teachers outside of über-expensive international schools. In primary and middle schools you get a forty-minute block to teach… something… to a group of forty (or more, god help you) screaming students. High school students are too burned out to really care about their foreign teacher, and my experience with university has mostly been teaching to ten motivated English learners and ninety people either sleeping or scrolling through their iPhones. Mr. Porteous’s success story isn’t necessarily a worldwide educational breakthrough, but I think it provides a blueprint for how hands-on foreign instruction can push students to succeed in ways that China’s current draconian culture of education could never do.

Previously: Teaching Culture with Your Language