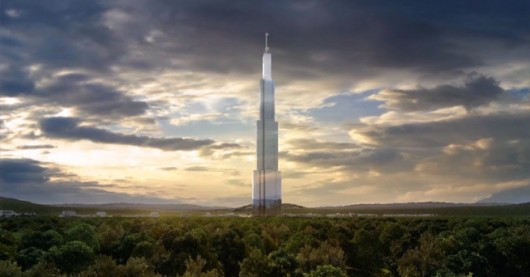 All work has been stopped, reports AFP, “because [builders] did not complete the required procedures for seeking approval to start construction,” the Xiaoxiang Morning Post newspaper said. The largest building in the world isn’t allowed off the ground because of paperwork? Right. Either someone didn’t get paid off, or this is the city’s way of saving face as it cuts its losses.

For what it’s worth, the company behind the project, Broad Group, had a spokesperson say that it had the required permits. What it never had, however, was the support it needed.

The People’s Daily, the official paper of China’s ruling Communist Party, has criticised the project, calling it “blind worship for ultra-high skyscrapers” on Sina Weibo.

Global Times wasn’t much kinder, either, in a story titled, “Questions asked over quick construction of world’s tallest building”:

In addition, BSB faces questions over whether its steel framework is safe and stable enough to build the 838-meter ultrahigh building.

Experts from Hubei Housing and Urban-Rural Development Department held a review meeting over BSB’s steel framework in October last year, and said that they believe that this type of steel framework can only be used for buildings lower than 100 meters tall.

If you intend to build the highest structure in the world without Beijing’s support, you’re dreaming.

Finally, here’s a Quartz article for your consideration:

Not everyone is so sure. It’s not clear that Broad Group can afford its $1.47 billion price tag, say Chinese critics, and constructing in such haste compromises safety. On top of that, there’s no actual need for Sky City.

Maybe Sky City will be finished sometime in the future. For the present, however, we’re going to go back to forgetting anyone ever thought it could exist.