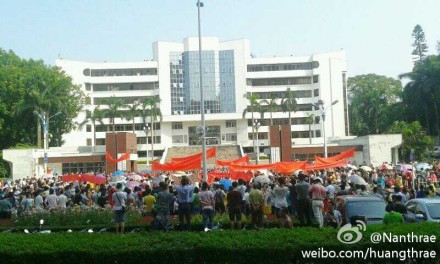 Hundreds of residents staged a not-in-my-backyard protest in Jiangmen, Guangdong province on Friday to oppose plans to build a uranium processing plant. SCMP reports that the protest, a restrained and civil affair, was largely organized via social media. The uranium complex, featuring three 30-hectare plants, would have been the nation’s biggest, reports NY Times. It adds:

Organized through social media and billed as an innocent stroll through the streets of Jiangmen, the demonstration was the latest example of urban Chinese willing to defy the authorities over environmental concerns. The government would not be likely to tolerate a similar gathering to demand political reform or an easing of news media restrictions.

Reached by phone, several residents said they were outraged to learn about the plant only last week when the government announced the project and then gave the public 10 days to submit comments. “They didn’t even let us know about it until it was almost started,” one man, Liang Naihe, said in an interview.

On Friday, the administration of Heshan, which operates under Jiangmen, announced support for the project.

One day later, the project was scrapped. Reports Voice of America:

The city government of Heshan, in the southern Guangdong province, said on its website Saturday that it was stopping the $6 billion project by China National Nuclear Corp (CNNC).

Mayor Wu Yuxion said the Heshan government respects the public’s opinion and will not apply for approval for the project.

Indeed, environmental protests have been uncannily successful in the past year, most notably when anti-PX protests in Ningbo led officials to say no “paraxylene (PX) project would be allowed in this city.”

Nonetheless, Sina Weibo censored images and updates from the events in Jiangmen. Mass demonstrations, even when officially sanctioned and producing the protesters’ desired result, walk too fine a line. 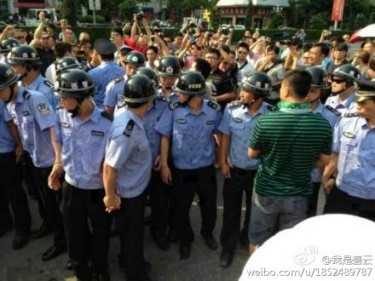