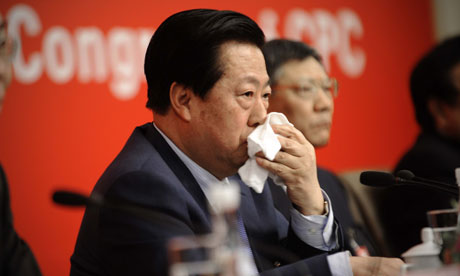 Someone doesn’t enjoy his job. Reports The Telegraph, Zhou Shengxian, who is China’s environment minister, was “quoted by state media as saying: ‘I’ve heard that there are four major embarrassing departments in the world and that China’s ministry of environmental protection is one of them.’”

Mr Zhou, an economist and veteran Communist Party member, blamed his ministry’s malfunctions on “overlapping” remits, which confused the agency’s role in handling issues such as carbon emissions and water monitoring.

So, what are the world’s other three major embarrassing departments? Funny you ask, because Chinese microbloggers have a few ideas:

Yujian Feitian, a third micro-blogger, proposed China’s petitioning department where officials are tasked with hearing and acting on the grievances of ordinary Chinese.

But let’s expand our search. Is the petitioning department worse than Iraq’s security ministry? What about the DPRK’s Korean Central News Agency? Does America’s TSA even scratch the list?

While we’re on the subject of the environment, you should know that a somewhat big study cracked the news today. Reports New York Times:

The study, which appears in The Proceedings of the National Academy of Sciences, was conducted by an American, an Israeli and two Chinese scholars and was based on analyses of health and pollution data collected by official Chinese sources from 1981 to 2001.

The results provide a new assessment of the enormous cost of China’s environmental degradation, which in the north is partly a result of the emissions of deadly pollutants from coal-driven energy generation. The researchers project that the 500 million Chinese who live north of the Huai River will lose 2.5 billion years of life expectancy because of outdoor air pollution.

Basically, “the destructive health effects of pollution” cause southerners in China to live on average five years longer than northerners.

NPR had the story too, though more or less a year and a half ago. These pollution stories have a way of blending together, don’t they?