It’s only five minutes and the acting is notional, but Verax is officially the first dramatization featuring NSA whistleblower Edward Snowden. The film, made by Hong Kong-based videographer Edwin Lee and friends, isn’t completely about Snowden – it’s as much a paean to Hong Kong — but it’s received ample media attention nonetheless. CNN reports that Lee first got the idea for the project on June 11, or two days after Snowden revealed he was in Hong Kong. The movie was completed in four days.

While Lee and his three co-directors/producers took creative license with plot details, such as an imagined briefing between a mainland Ministry of State Security attaché and Hong Kong police, they also filmed scenes inside the same hotel where Snowden had stayed and shot a video interview with The Guardian. Renting the hotel room cost half of their estimated HK$4,200 budget (US$ 540), Lee said.

We found the dig at SCMP chuckle-worthy. There’s a not-so-subtle implication that an editor there (“South China Sentinel” in the movie) passed on a possible Snowden scoop, forcing his reporter to focus on a Tiananmen package instead. (“Stop chasing the nonsense.”) In real life, of course, the Guardian had the scoop, though no one had as enthusiastic coverage of the Snowden escapade — sometimes in all-caps – as the South China Morning Post.

The man who played Snowden in Verax (Snowden’s code name) is Andrew Cromeek, an English teacher and friend of Lee’s. He doesn’t have any dialogue, but he does bear a slight resemblance, as WSJ documents: 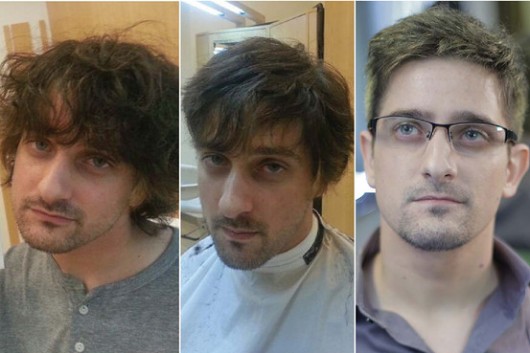