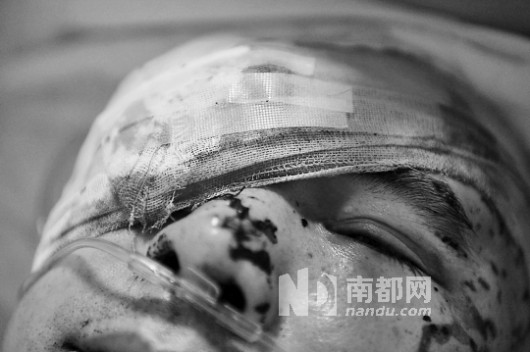 This is really awful and despicable beyond words. An anti-corruption whistleblower in Huizhou, Guangdong province apparently made very powerful enemies over the course of the past year, enemies who finally got to him on Monday morning when three men attacked from behind using sulfuric acid and knives, according to Southern Metropolis Daily.

Li Jianxin, 47, was blinded in his right eye, suffered severe burns, and may never have full use of some of his fingers. His six-year-old son witnessed the entire attack from his car. As Shanghai Daily puts it:

The attack occurred shortly after he left home to drive his son, 6, downtown. His car was suddenly hit in the rear when he was passing a sparsely occupied road, he said.

After he got out of the car, three men in the car behind him walked up to him, throwing sulfuric acid on his back and slashing at him with knives. He could not flee since his son was still in the car, he said.

Southern Metropolis Daily’s lengthier write-up includes an interview with Li’s wife, Li Guiqiong. As she tells it, her husband, a truck driver, didn’t have much work last June, so he stayed at home and surfed the Internet. He came upon some problems — possible connections between businessmen and officials — and began snooping. “I told him to not mind so much business,” Guiqiong said. “He told me not to mind his business.”

Shanghai Daily says Li also uncovered “reports of local mafia-like gangs and other social problems,” and “posted dozens of online exposes.” In March, a brick was thrown through his daughter’s window, but that apparently didn’t stop Li. It all led to the vicious attack on Monday.

“Local police are investigating the case,” Southern Metropolis Daily reports. The police have opened up an anonymous tip hotline that offers 100 yuan for helpful information.

One Response to “Whistleblower Attacked With Acid, Knives, Blinded In One Eye”