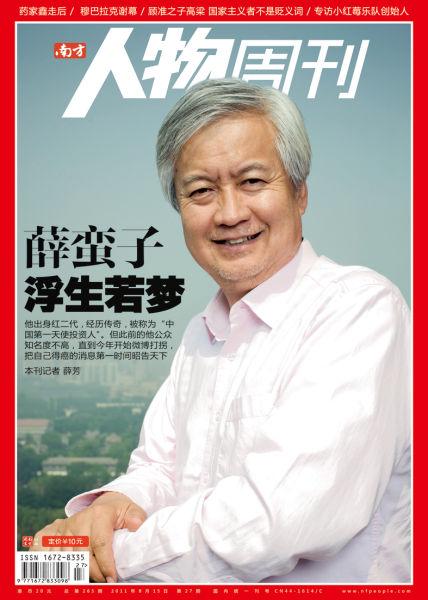 Chinese American angel investor and Sina Weibo celebrity Charles Xue (a.k.a. Xue Manzi, with more than 12 million followers) has been detained in Beijing for “suspected involvement in prostitution,” China News reported on Sunday.

On August 23, off the tip from a local resident, Chaoyang District police captured Xue along with a 22-year-old woman from Henan province in a residential compound, according to the official weibo of Beijing Public Security Office:

After questioning, the two confessed to solicitation. The police department has placed the two under administrative detention in accordance with the law.

Charles Xue, whose Chinese name is Xue Biqun, is a prominent liberal celebrity who has actively campaigned against child trafficking. Born in Guangdong province in 1953, he is an American citizen. His father, Xue Zizheng, was a vice minister in China’s central government and died in 1980 at the age of 75.

Could Xue’s arrest be the result of retaliation for his outspokenness? Hu Xijin, the chief editor of Global Times, gives us some clues through his Weibo comment regarding this affair (now deleted, but preserved via screenshot):

We cannot exclude the possibility that authorities were using prostitution to entrap Xue Manzi. It is an unspoken rule that all governments worldwide frame political opponents through sex scandals, tax evasion charges. So here’s a reminder to those who engage in political dissent, if you wish to go down this path, keep your butts clean. If you have shortcomings yet still take on officials, you’ll be squashed sooner or later. And also, a reminder to the government, crack down on the right target and the process won’t be nitpicked, otherwise it may backfire.

Xue’s arrest comes during a continued crackdown by police in China against “online rumor mongers.”

Beijing police detained Liu Hu, a journalist at the popular newspaper News Express Daily based in Guangzhou, on suspicion of spreading rumors and stirring trouble after he alleged in late July that a senior government official was negligent with his public duties, People’s Daily reported on Sunday.

Also, Internet celebrity Zhou Lubao was arrested by Suzhou police for spreading online rumors and blackmailing people for up to several million yuan, Xinjingbao (New Beijing Daily) reported. The report said Zhou had accused the mayor of Lanzhou of wearing luxury watches that he could not afford.

And last week, Yang Xiuyu (a.k.a. Lierchaisi), founder of the Erma Company, and employee Qin Zhihui (a.k.a. Qinhuohuo) were arrested by Beijing police for “fabricating and spreading online rumors” regarding corruption, and “defaming the image of Lei Feng.”