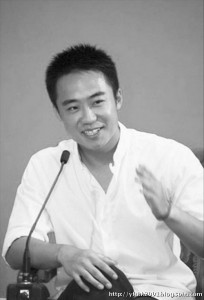 In a two-paragraph statement to the New York Times, Bo Guagua — the son of Bo Xilai and Gu Kailai, convicted last August of murdering British businessman Neil Heywood — said he has been denied contact with his parents for the past year and a half, and hopes his father gets a chance to defend himself at his trial that is scheduled for Thursday.

Then he dropped a big “however”:

I hope that in my father’s upcoming trial, he is granted the opportunity to answer his critics and defend himself without constraints of any kind. However, if my well-being has been bartered for my father’s acquiescence or my mother’s further cooperation, then the verdict will clearly carry no moral weight.

It’s a sly remark. In Bo Guagua’s view, his father is not being “tried” for bribery, corruption, and abuse of power, but persecuted, like Ned Stark, and only through the noble, self-sacrificing gesture of bargaining for his son’s well-being will he acquiesce to his accusers.

What else is a son to think?

The second of the two paragraphs is interesting, too:

My mother, who is now silenced and defenseless, cannot respond to the opportunistic detractors that attack her reputation with impunity. She has already overcome unimaginable tribulation after the sudden collapse of her physical health in 2006 and subsequent seclusion. Although it is of little comfort to my anxiety about her state of health, I know that she will continue to absorb all that she is accused of with dignity and quiet magnanimity.

Opportunistic detractors? You’d think he doesn’t live in the US, judging by how little he understands the way media works. Look on the bright side though: if Gu Kailai had been tried in the US, Jay Leno would still be cracking jokes. Or is Guagua, perhaps, talking about the Heywood family demanding millions as compensation to the death of Neil? As if that weren’t standard operating procedure.

Anyway. Again, what’s a son to do?